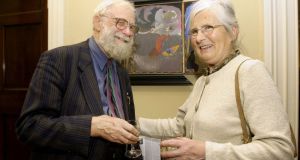 Patrick Pye pictured with his wife Noirin. Mr Pye was told that his cnuas, the € 17,180 Aosdána stipend, was to be discontinued. Photograph: Cyril Byrne

Aosdána has criticised the Arts Council for failing to consult properly with it on proposed changes to its members’ funding.

At a lengthy private session of its annual general assembly yesterday in the Royal Hospital Kilmainham, the affiliation of creative artists debated what it described as “the crisis created by the Arts Council’s review document” and the treatment of one of its founder members, the painter Patrick Pye.

Mr Pye, an 88-year-old artist with fading sight and restricted mobility, was told by the Arts Council at the end of last month that his cnuas, the € 17,180 Aosdána stipend, was to be discontinued.

Last November, the Arts Council, which funds and administers Aosdána, issued a confidential draft discussion document to the organisation’s elected committee, the Toscaireacht, on possible changes to the cnuas and to other structures, describing it as the first step in a “long and open discussion process”.

The document, which suggested changing the definition of those eligible for funding from “full-time practising artist” to “working artists engaged in productive practice”, was condemned by writer Colm Tóibín last week as being reminiscent of the Soviet Union or North Korea.

Aosdána was established in 1981 by then taoiseach Charles Haughey. Its 250 members include writers Edna O’Brien and Patrick McCabe and playwrights Tom Murphy and Tom MacIntyre.

While members leaving the meeting were reluctant to comment individually, a statement released on behalf of Aosdána said its members had unanimously agreed that, by failing to consult, the council had made proposals which were “manifestly unfair and, if accepted, could damage the organisation and deprive other old and ill members of their livelihood, as has happened in Mr Pye’s case”.

The meeting agreed that it was vital to establish in the public’s awareness that in order to receive a cnuas, members had to devote themselves full time to their art. “Many of our members have given up well-paid employment in order to continue to make their contribution to the culture of our country,” it stated, calling for a restoration of a relationship of trust and co-operation between the two bodies. “Today the general assembly unanimously committed Aosdána to that mission and reached out to the Arts Council,” it said.