An evening with Kathleen Turner and Maggie Smith: This week’s unmissable online events 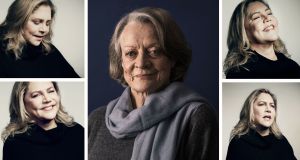 Dame Maggie Smith and Kathleen Turner
Thursday, April 8th, 6.30pm, £20, fane.co.uk
On the face of it, this seems an odd couple to be teaming up for a livestreamed interview. Maggie Smith is the renowned British actor who has starred in such classics as The Prime of Miss Jean Brodie, Room with a View, Downton Abbey and the Harry Potter series. Kathleen Turner is the renowned American actor who has starred in Body Heat, Romancing the Stone, The War of the Roses and Friends.

It was theatre that sparked their friendship: the pair met in 2000 while starring in adjacent West End productions, Smith in The Lady in the Van and Turner in The Graduate. The two have never performed together, but they’ll be joining forces onscreen, from opposite sides of the Atlantic, for the first time in this livestreamed event hosted by Gyles Brandreth. Expect lots of great stories from two very storied careers.

3 Robert Watt may seek to rein in Tony Holohan

7 Gordon D’Arcy: Béibhinn Parsons is the gift, IRFU must now do the giving

10 Kathy Sheridan: The online threat to the integrity of Irish elections lies within

12 Dublin is fifth most expensive place for renters in Europe

14 Everyday banking: Are we getting less but paying more?

15 What is unionism without the union? The question has us spooked

24 ‘I could attach 10 years of sadness to a throwaway comment, and nobody would know except me’

28 Food and mood: Why nutritional psychiatry is attracting attention

31 On the centenary of Northern Ireland’s birth, let’s imagine a potential rebirth of Ireland

34 Can I see copies of earlier wills my mother wrote?

38 Remains of mothers and babies should be ‘returned’ to families