Alas Awake: Seán Mac Erlaine on the inspirations and motivations behind his new work

Seán Mac Erlaine's new work is a site-specific setting of Joyce's 'Finnegans Wake' that melds choral work, collage, improvisation, live electronics and visuals by Donal Dineen. Here, the composer explains his desire to conjure up the world and epoch of Joyce’s Dublin 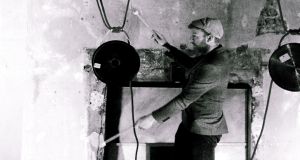 I first got really interested in James Joyce as a teenager reading Ulysses instead of whatever was on the English syllabus in school. That book’s wonderful arc of plot, fuzziness of communication and deep imagining of the atmosphere of Dublin stayed with me for many years.

Joyce’s most popular masterpiece was the gateway drug into his final masterwork, Finnegans Wake. By the time I reached the Wake, I was already a professional musician, and I immediately responded to the sound of it being read aloud.

In my own work with woodwind instruments, I was searching for a vocal quality in my playing, something which was informed by the voice yet also removed from it. I started to use live electronics to process clarinets to create simultaneous layers of overlapping rhythms and melodies, camouflaging the instruments sound at times and looking for colours beyond the limits of the acoustic clarinet. All this seemed to be a mirror of sorts to Joyce’s word-play to the point of abstraction and his tumbling multiplicity of information.

Marrying Finnegan to music
Four years ago I started asking myself what could happen if the multilayered, hyper-creative text of Finnegans Wake was set to music? The musicality, rhythms and accents of this book are often commented on. It is a text which comes alive in performance in a way utterly different to any other book reading.

Joyce’s own audio recording from 1929 gives us a tantalizing nine minutes example of his own sonic interpretation of it. That was my jumping off point. I looked for ways of combining the sound of the text, the fluidity of the form, and the poetry within the syntax which Joyce invented.

Improvisation was going to be a key ingredient to convey these sudden stretching of vowels, and lightning speed transitions between characters, genders, places, languages and meanings. I picked a small choir led by vocalist Dorothy Murphy to perform with. I wanted them to work both with text and with abstract gestures, improvising musically with these.

To add another dimension of imagination, I commissioned Donal Dineen to create a new film piece based on a particular section of text. While perhaps better known for his DJ, writing and presentation skills, I knew that Donal was passionate about Joyce. I was amazed to finally see his poetic abstract images alongside Joyce’s text, creating something magical: well beyond music, text or the combination of both.

Georgian setting
The final ingredient is the setting, a dilapidated, empty Georgian residence a few doors from where Joyce went to school on a street which he knew intimately. The musical composition is made for this space, taking into account the flow of the house, the patina of the crumbling walls and the acoustics of these once elegant, large reception rooms. Alas Awake is heavily influenced by my work in site-specific theatre and  collaborative music projects.

The building becomes another character in the work, as a small audience is lead through different rooms each with peeling paint and flaking plaster, accompanied by interpretations of the sounds of one of the 20th century's greatest works of literature.

Alas Awake runs from May 21st  to Sunday May 24th as part of the International Literature Festival Dublin. For more details, see ilfdublin.com

Robert Eggers on bringing Robert Pattinson to The Lighthouse
8

New Irish Writing: A Little Cloud by A Joseph Black
9