A lecturer turns Viking: ‘My colleagues thought I was quite mad’

A UCC academic set sail on a Viking warship, experiencing all the hardships of that primitive life, with lifejackets the only nod to modernity 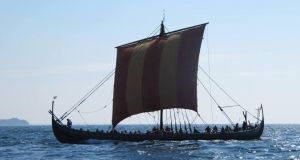 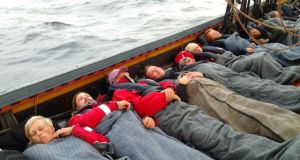 Sleeping arrangements on board the Sea Stallion

A UCC academic sailed out of his comfort zone when he joined the crew of a replica Viking ship to experience the conditions faced by seafaring Vikings a thousand years ago. Lecturer in Old English Dr Tom Birkett is leading a research team investigating Viking heritage in Munster as part of a UK-based Arts and Humanities Research Council-funded project, Languages, Myths and Finds: Translating Norse and Viking Cultures for the 21st Century.

Birkett, who joined UCC last year from Oxford, boarded the Sea Stallion in Korsor, Denmark in July and spent two weeks on board, docking in Copenhagen. The 30m ship featured in a series of heritage events at the National Museum of Denmark, whose Viking exhibition will travel on to the British Museum next year.

The Sea Stallion is based on the warship Skuldelev 2, which was built in or near Dublin in 1042 using oak from the Glendalough area. It was discovered in Denmark’s Roskilde fjord in 1962, along with four other ships, and now resides at the Viking Ship Museum in Roskilde. In 2004 a replica, The Sea Stallion of Glendalough, was made using original techniques at a cost of over €1 million. It visited Dublin in 2007.
Birkett was drawn to Viking culture during an Erasmus year in Oslo, where he studied runology and Scandinavian literature.

“It’s such a fascinating period, a time when everything in Europe was in flux and different societies were coming into contact with each other for the first time,” he says. “The Vikings had an incredible spirit of adventure. They reached America way before Christopher Columbus. ”

Birkett was one of 60 crew members on board the Sea Stallion. “There is no such thing as a passenger on these ships,” he says. “Everyone had work to do.” The crew included academics, retired sailors and boat builders, and locals from Roskilde.

As part of the foreship team, Birkett says he was in “the most exciting” part of the ship. “We had the best views and got to ride the waves. It was also the wettest part of the ship. We got soaked occasionally. It was very physical. There was a lot of rowing coming in and out of harbours. I had never done any sailing. As a land lubber and academic with no experience of the sea, I was very lucky to be taken on.”

The crew experienced the same hardships the Vikings would have encountered. “We slept in four-hour shifts under woollen blankets. We had to make our beds out of the oars. If it was raining, there was just a blanket between us and the elements.”

While the crew had lifejackets, they lived on board as Vikings. “We had to do all the sailing as there is no engine on the ship. It was very primitive.”

The roots of Danish equality
Despite limited space, “we all got on remarkably well because we always had a job to do. What I found interesting is the way the Danes always talk about their society being equal. The leaders on the Viking ships were not considered special, just the best among good people. Everyone chips in. That feeds back into Danish society.”

The Vikings coped well with physical pain. “One of the finds on display in Copenhagen is of a skull with its teeth engraved with horizontal lines. More and more examples of this are being discovered. It may have been a fashion to show how impervious you were to pain, not too dissimilar to some modern piercings. Thankfully, it wasn’t a requirement for the modern crew of the Sea Stallion.”

Birkett is launching a module on the poetry of the Vikings for third year students at UCC this academic year. While at sea, he recited Norse poetry for crew members. “I’m afraid I didn’t get any research done. But the experience opened up the most amazing questions, which will keep feeding into my research.”

As a result of the trip, he can engage more with the Old English texts he teaches. “Poems like The Wanderer and The Seafarer are elegies about people exiled from their community who take a solitary journey on the waves. They’re about how lonely it is with only the birds for company. The journeys seem to be spiritual, moving towards recognition of the divine. When you’re on board a ship with 60 people, you take the community with you and realise that you’re relying on one another.”

Birkett says Viking literature, passed on orally and written down in Iceland in the 13th and 14th centuries “is unparalleled. There’s nothing like it anywhere else in Europe from that period”. His experience was about “understanding through doing. I’ve never done a research trip like this before. Normally I sit in a library looking at manuscripts, which is very serene. Some of my colleagues thought I was quite mad.”