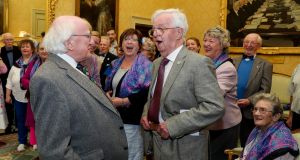 President Michael D Higgins with Michael Holohan from the Forget-Me-Nots choir who was at Áras an Uachtaráin in 1939 as a six-year-old boy.

A small boy, who attended the first garden party held in Áras an Uachtaráin by Ireland’s first president, Douglas Hyde, has, 80 years later, returned to the Áras to preform at a garden party hosted by the ninth president, Michael D Higgins.

Michael Holohan, who is a member of the Forget-Me-Nots choir, preformed at the event to celebrate the 100th anniversary of the first Dáil on Wednesday.

Mr Holohan was present at the inaugural garden party, which Mr Hyde held for children in 1939.

“I was six at the time, I can remember we came on a bus from the Mansion House and had cake and lemonade. The Áras has changed beyond belief, it’s so much brighter, and cleaner now.”

His performance in a play in a 1939 drama feis resulted in his being selected to attend the children’s party.

“I was still in the convent in the Presentation in Warrenmount in the Blackpits, at the time you went to the convent for infants before you went on to the boys school for primary, and my class was chosen to go because we’d been in the feis drámaíocht. I’ve since done research and there were 700 children running around here for the party.”

Ms Owen is also a member of the Forget-Me-Nots choir which welcomes members with dementia. Ms Owen joined the choir with her husband Brian, who has dementia.

Senator Gerard Craughwell, once mooted as a presidential hopeful, who previously questioned Mr Higgins about his spending on hotels, also attended the party.

The mood was jovial despite the dismal weather, with few referencing the other pertinent political gathering of the day, the meeting of Taoiseach Leo Varadkar and US president Donald Trump in Doonbeg. One distinguished guest, who asked not to be named, did, however, almost cause an international incident when she quipped that she had a blimp in her bag that would inflate at the appropriate moment when she pulled a cord.

Minister of State for Disability Issues Finian McGrath, who has said he intends to protest against Mr Trump’s visit at the Garden of Remembrance on Thursday, also attended.

He said he had informed Mr Varadkar that he would be attending the protest. “The Taoiseach is aware of my clear position in relation to Trump for a long, long time.”