Win one of three copies of World Travel – An Irreverent Guide, by Anthony Bourdain, with Laurie Woolever 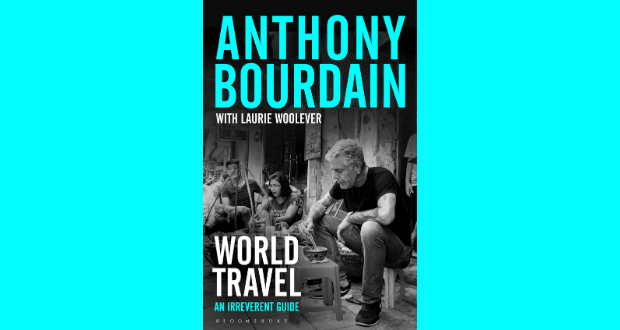 We have three copies of World Travel – An Irreverent Guide, by Anthony Bourdain, with Laurie Woolever,  to give away.

We may be armchair travellers for the moment, but with this new book from one of the world’s most loved food and travel writers, you can escape to some of the most fascinating places on earth. Anthony Bourdain died in June 2018. At what was to be his final meeting with his writing collaborator  Laurie Woolever, with whom he co-wrote Appetites in 2016, the pair plotted the outline of  a book that would take readers to some of his favourite places. The idea was to transport readers to those places and arm them with information on how to get there, where to stay, what to see, and most importantly, what to eat. They would be given the frank, no holds barred,  Bourdain signature treatment.

Woolever completed the project after Bourdain’s death, using his own words, quotes and impressions, gleaned from his many travel shows, and with help from some of his family and friends who contributed essays to the compendium.

World Travel – An Irreverent Guide is published on April 20th, by Bloomsbury.

This competition is now closed.

1.    The promotion is open to residents of the Republic of Ireland aged 18 years or over except employees of the Promoter, their families, agents or anyone professionally connected with the promotion.
2.    A valid entry consists of a correct answer entered in the form above, accompanied by the entrant’s name, email address and a phone number.
3.    No applications from agents, third parties, organised groups or applications automatically generated by computer will be accepted. No incomplete, illegible, or corrupted entries will be accepted. No entries not in accordance with the entry instructions will be accepted.
4.    The Promotion will run from 09/04/2021 to midnight on 26/04/2021 inclusive.
5.    All entries must be received by the Promotor by no later than midnight on the Closing Date.  All competition entries received after the Closing Date are automatically disqualified.
6.    Promotion limited to one entry per person. No entrant will win more than one prize.
7.    By submitting an entry to the Promotor, you are agreeing to be bound by these terms and conditions.
8.    Responsibility will not be accepted for entries lost, damaged or delayed as a result of any network, computer hardware or software failure of any kind. Proof of sending is not proof of receipt. Entries will become the property of the Promoter.
9.    The prize is one of three copies of World Travel – An Irreverent Guide, by Anthony Bourdain, with Laurie Woolever. There will be three winners.
10.    All prizes will be subject to any additional terms and conditions of the supplier of the prize to the Promoter.
11.    The Promoter shall not be liable for any loss, damage or consequential damage of any nature in contract, tort (including negligence) or otherwise caused by the acceptance of the terms and conditions or in connection with the prize.
12.    In the event of unforeseen circumstances the Promoter reserves the right to substitute the prize for an alternative of equal or greater value.
13.    The winners will be notified by email. The winner must claim the prize within 30 days of the notification. If the prize is unclaimed after this time, it will lapse and the Promoter reserves the right to offer the unclaimed prize to a substitute winner selected in accordance with the Promotion rules.
14.    The promoters’ decision is final and binding in all matters and no correspondence will be entered into.
15.    The winners’ details (name and county) will be made available on The Irish Times website.
16.    The winner may be required to participate in unpaid publicity arising from this promotion.
17.    The Promotor will only process your personal information as set out in https://www.irishtimes.com/policy-and-terms/privacy-policy and as set out in these terms and conditions.
18.    Prizes are non transferrable and cannot be exchanged for cash.
19.    These terms and conditions shall be governed by Irish law and the Courts of the Republic of Ireland shall have exclusive jurisdiction.
20.    Promoter and Data Controller: The Irish Times DAC, The Irish Times Building, P.O. Box 74, 24 - 28 Tara Street, Dublin 2.
21.    The Promoter reserves the right to hold void, suspend, cancel or amend the Promotion where it becomes necessary to do so.