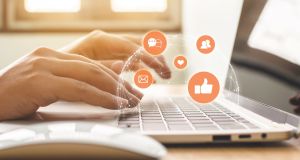 Slacking off from Slack makes a lot of sense to me. Photograph: Getty Images/iStockphoto

Last week a prominent New York Times columnist named Bari Weiss wrote a letter to the paper’s publisher to say she was quitting.

A “new McCarthyism” had taken root in the newsroom, she claimed, and her “wrongthink” views on what were deemed to be the “right causes” had spurred “constant bullying” from co-workers whose behaviour had gone unpunished. Then she wrote a sentence that would have made no sense before 2014: “My work and my character are openly demeaned on company-wide Slack channels.”

I mention 2014 because that was the official launch year for Slack, the increasingly inescapable office instant messaging system. If you have never used it, imagine a souped-up version of WhatsApp or Facebook Messenger that makes it easy to chat with people across your company 24 hours a day.

By many measures, it is a wonder. By 2015, Slack was valued at nearly $3 billion (€2.6 billion). At its stock market debut last year, it hit $20 billion (€17.5 billion). More than 750,000 companies (including the FT) have signed up for it and at least 12 million people use it actively each day. Use has jumped during the pandemic as people working from home have struggled to stay in touch. Daily messages sent rose by an average of 20 per cent per user worldwide between February 1st and March 25th.

But here is the thing about Slack and its growing number of rivals: not everyone who has it uses it.

I have no idea who wrote what about Ms Weiss on it inside the New York Times, nor do I know whether her bosses should have done something about it.

But I am willing to bet that not every senior manager was as glued to Slack as much as those who did the writing.

To generalise greatly, workers who grew up texting or WhatsApp-ing instead of phoning or emailing gravitate easily to a system such as Slack but their bosses often do not.

Some analysts think this means that Slack and its like are fuelling a “bottom-up revolution” in US media companies, where younger staffers use the tools to organise and demand change. I suspect this would have happened anyway, and not just in American media groups.

But I do think the Weiss letter underlines one of the most irksome problems with systems such as Slack: they splinter communication, especially inside big companies that need it more than ever now that so many staff are working from home.

A friend of mine at a large firm moaned often before the pandemic about the need to constantly check for important work news on email and Slack, along with Google Chat, Facebook Workplace and a slew of other platforms that had crept relentlessly into his office. Now he has gone into overdrive.

That points to one of the big failures of workplace chat tools. They were supposed to replace or at least reduce brimming email inboxes. Instead, too many people must now spend time monitoring both.

That is not all. Because Slack feels so similar to the pinging messaging apps we use at home, it instils a sense of privacy at work that does not necessarily exist.

There are times when its use does make sense. For a one-off team assignment with a pressing deadline, it is brilliant. It can also help to keep far-flung team members in touch.

But the chief reason I will always find it hard to love Slack is that it can be such a monumental distraction.

Last week I contacted a company called Time is Ltd that analyses the use of systems such as Slack to help companies boost productivity.

It told me Slack users are sending – and receiving – between 800 and 2,500 messages a month. Not only that, once they get a message addressed to themselves, they tend to respond within an average of just 12 minutes.

That adds up to a lot of interruptions, which is a problem. Researchers say it can take about 23 minutes to return to the task at hand after being interrupted. Some jobs require ceaseless communication. But most do not, meaning a lot of this activity either dents productivity or creates stressful extra work to make up for lost time. Either way, slacking off from Slack makes a lot of sense to me.