SoftBank warns it could back out of WeWork stock deal 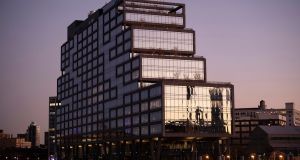 SoftBank has warned it could withdraw from a $3 billion (€2.7 billion) purchase of shares in WeWork, the loss-making office space provider that it rescued late last year as the company was staring down insolvency, according to sources.

The Japanese telecoms-to-technology group notified WeWork investors, which include the group’s co-founder Adam Neumann and venture capital firm Benchmark Capital, that regulatory investigations into the company could let it back out of its planned share purchases.

US securities regulators in Washington have been scrutinising WeWork and how it presented its financials and valuation to investors and employees, people with knowledge of the matter said.

WeWork has leased space at the old Central Bank development on Dame Street and at George’s Quay House in Dublin. It was in the running for another of other Irish lease deals last year, but its financial difficulties stemmed its efforts to expand.

SoftBank had told investors it was planning to complete the $3 billion share purchase around April 1st, after it received sign-off from antitrust authorities. Mr Neumann was allowed to tender WeWork stock worth as much as $970 million in the offering as part of a deal the co-founder struck when he agreed to give up control of the property company to SoftBank.

The Japanese group may still go ahead with the stock purchases at a later date and will update investors again before April, one source added.

SoftBank, which was set to own roughly 78 per cent of WeWork after it completed the tender offer, is still contractually obliged to finance a $3.3 billion debt package it previously agreed to fund as part of the rescue package.

However, it is unclear if SoftBank will attempt to rehash the entire rescue agreement, which could open the door to litigation between the two companies, investors and Mr Neumann.

One person close to the Japanese group said that SoftBank is still committed to its investment in WeWork and does not face any financing issues in supporting the property company.

The global economic shock triggered by the coronavirus pandemic has raised stark questions about the outlook for all commercial property companies, and in particular for co-working providers such as WeWork.

The related slide in stock markets around the world has also dragged down SoftBank’s stock by roughly 38 per cent in the past month - a fall that accelerated on Wednesday after the credit rating agency S&P Global cut its outlook on the company, sending the stock down as much as 12 per cent in Tokyo.

Two lawyers who have drafted similar agreements to the one that SoftBank signed with WeWork said it would be difficult for the Japanese company to walk away from the deal it reached with the office rental lessor following its failed stock market listing last year.

WeWork’s business would need to be affected in a specific way to allow SoftBank to change the terms of its tender offer, said one of the lawyers, who asked not to be named because they were not authorised to discuss client matters publicly.

SoftBank agreed in October to save WeWork with a multibillion-dollar rescue package after the company aborted its hotly anticipated initial public offering. The company’s decline last year captivated the corporate world; in a matter of months its valuation plummeted from $47 billion to $8 billion. – Copyright The Financial Times Limited 2020

1 Lockdown exit: How can Irish economy reopen without big health risks?
2 Property market has not felt full impact of Covid-19, warns Sherry FitzGerald
3 Government announces €1bn in supports for small businesses
4 I want to change my will quickly in case I fall ill. Do I need a lawyer?
5 Business Post cuts pay for staff by up to 15%
6 German fund closes €93m Harold’s Cross build-to-rent deal
7 Facing economic meltdown ... and nothing wrong with our economy
8 Q&A: Where do we stand on mortgage holidays and payment breaks?
9 Tesco says coronavirus costs could reach €1bn
10 Digital health platform SilverCloud Health raises €14.7m
Real news has value SUBSCRIBE