As David Brent returns, his creator discusses the universality of the office existential crisis 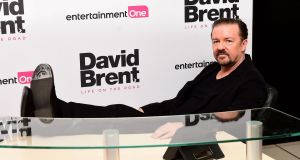 Ricky Gervais: “Brent is basically a decent guy; he mistakes popularity for respect and we all want respect, we all want love, we all want to do the right thing.”

In the middle of David Brent: Life on the Road, a new film following the fictional former middle manager-turned-salesman, one of the characters – Pauline from accounts – lashes out at the bully-boy alpha males humiliating Brent. “Before, David was the boss and worked with nice people and now the world’s worse!”

Her cri de coeur could well have come from Ricky Gervais himself, the comedy writer who co-created and starred as David Brent in the 2001-2003 mockumentary BBC TV series, The Office, later remade for US television. The series proved to be the goose that laid golden eggs for Mr Gervais and his former writing partner, Stephen Merchant.

The comedian hopes that after watching this film, which he also wrote and in which he also stars, people will like Brent a “little bit more because the world’s worse”. He wants people to hug the Brent in their office.

“In fiction we create our own heroes and villains as role-play for the soul,” says Mr Gervais, who shares the same penchant as his protagonist for putting his feet up on his desk. “Brent is basically a decent guy; he mistakes popularity for respect and we all want respect, we all want love, we all want to do the right thing.”

More than 12 years after the end of The Office, when he was made redundant as regional manager of Slough paper supplies company Wernham Hogg, the film finds Brent working as a travelling salesman at Lavichem, a toilet cleaning and feminine hygiene products company.

We learn that he has built himself up after a period of depression that led him to take Prozac, and his weight to balloon, earning him the nickname “Brentosaurus”. When he re-enters the workplace, he has slipped down the career ladder. The film follows 55-year-old Brent (Mr Gervais always plays his age) as he burns through pension savings to fund a tour with his band, Foregone Conclusion.

Shot in a similar mockumentary style to The Office, the film will be released in cinemas in the UK and Ireland on Friday August 19th.

Brent’s new working life is shaky. Mr Gervais describes the character’s former employer as “a nice little paper merchants”. The cleaning company is far harsher. “Now he’s surrounded by alpha males, he’s almost bullied so he’s more tragic and he’s more likeable because he’s not like that – he can’t compete in this dog-eat-dog world any more.”

A mix of reality television competitions, such as The X Factor, and the perpetual cycle of outrage and trolling on social media, has created a shame culture that has tipped into the workplace, he says. “It’s become acceptable to be ruthless . . . We want to see [people] booed to death.” He is grateful he started writing in a pre-Twitter age.

When Brent arrived on our television screens, the middle manager who wanted to be seen as “a friend first and a boss second, probably an entertainer third” was so excruciating to watch because he was recognisable. He was middle everything – middle aged, middle England, middle management.

At one time, people would have aspired to Brent’s job. But after rounds of restructuring, middle managers are often stripped away as an unnecessary layer of bureaucracy. Take Zappos, the online shoe retailer, which declared in 2014 that it would eliminate managers. The Office reflected the zeitgeist.

As the television series developed, Brent became an increasingly pathetic figure – isolated and lacking self-awareness. His character is a sad rebuke to anyone who has over-identified with their job, such as in the scene when he was to be made redundant, only to stand up to reveal he was wearing an ostrich costume.

The world of work, Mr Gervais says, is fascinating. It is a theme he has taken up in other projects, such as Extras, the BBC television series following “background” performers. “We probably work more than anything else – even if that’s avoiding work, that’s sort of work,” he says. The Office was always, he says, about the minutiae of human behaviour, such as hypersensitivity to colleagues’ habits. “It doesn’t matter whether you’re the head of the mafia or Nasa, it’s ‘why has he got a bigger office than me?’ It’s human.”

There is a universality in existential crises, or as Mr Gervais puts it, “stifled dreams”, a theme that runs through the series and the film. Brent is delusional but he is trying, says Mr Gervais. “He wants to be a rock star but so what?”

The words of one song Brent sings read like a salesman’s lament: On the road again/A week in cheap motels, yeah/I’m earning my bread/As long as I’m back for the weekend,/Hey, I’ll sleep when I’m dead.

The reason, I suggest, the film’s plot has taken Brent on tour is that the office is a world that Mr Gervais no longer inhabits. Mr Gervais denies he has lost touch with workplace politics.

“I still have meetings. I still know all the politics, I’m still on set; that’s my office; it’s still the same, you have to worry about people’s feelings and hiring and firing and all [the] same admin and politics.”

Why does Mr Gervais work? He does not need the money, after all. “I didn’t need any more money after one year; need’s an odd thing. After writing The Office, literally after six months I had more money than I thought I’d ever have and it wasn’t a lot.”

Growing up in a council estate in Reading to a labourer father and housewife mother, he did not know he was working-class until he got to university and “everyone spoke a little bit like the royal family”.

The comedian went on to become a student union entertainment manager, and landed a job at Xfm, the London radio station, at the age of 36, where he met Mr Merchant.

He works because he loves it. Once he asked his friend David Bowie why he continued to work, despite the fame and fortune. The late rock star’s response resonated. He simply stated: “To stave off the boredom until death.”