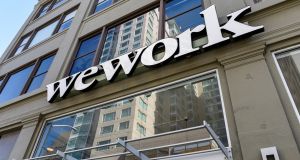 Sandeep Mathrani, WeWork’s new chief executive, knows what it’s like to lead a company out of trouble.

His former employer, General Growth Properties, had been flattened by the economic recession of 2008. GGP, the second-biggest owner of shopping malls in America, named Mathrani as chief executive in 2011 as it was emerging from what was then the biggest real estate bankruptcy in US history.

Six years later, Mathrani sold the business to Brookfield Property Partners in a deal valued at about $15 billion (€13.56 billion). The project won him a reputation as a corporate turnaround artist. “I’ve had plenty of opportunities and plenty of luck,” he said last year during an acceptance speech for a real estate industry award.

That luck will surely be tested in his new job at WeWork. The troubled co-working company appointed Mathrani, 57, as chief executive on Saturday. He’ll report to Marcelo Claure, the executive chairman at WeWork and operating chief at SoftBank Group, WeWork’s majority owner. In a statement, Claure praised Mathrani’s “turnaround expertise.”

Mathrani is a fixture in the clubby world of commercial real estate, but he also has some experience working with startups. At Brookfield, he led an investment in Industrious, a WeWork rival. “While real estate is full of some very dry, very conservative characters, Sandeep is very much not that,” said Jamie Hodari, co-founder and chief executive of Industrious. “If WeWork wanted to bring in someone with serious real estate chops but who was a little closer to the WeWork spirit, he seems to fit that bill.”

However, WeWork poses a very different challenge from the shopping centre business. Adam Neumann, its larger-than-life co-founder, started WeWork in 2010 to rent trendy office spaces to companies and free-lancers. He pitched it as a hybrid real estate and technology business, a “physical social network.”

Investors bought into Neumann’s vision, giving him billions of dollars and mostly unchecked authority to set up offices around the world. SoftBank, a Japanese technology conglomerate, was the biggest believer and drove the valuation of the business up to $47 billion.

But when they tried to take the parent company We Co. public last year, the plan quickly crumbled under scrutiny from Wall Street. WeWork was spending far more than it was generating in revenue and had a litany of apparent conflicts of interest with Neumann, who received loans from WeWork as it paid him rent on buildings he owned. WeWork pulled the IPO in September and agreed to sever ties with Neumann, netting him an exit package worth more than $1 billion. SoftBank said it would rescue the company by arranging about $9.5 billion in financing.

The appointment of Mathrani has parallels to the situation at another unicorn startup once beset by crisis. Uber, which also counts SoftBank as its largest shareholder, replaced its controversial co-founder with Dara Khosrowshahi in 2017. Khosrowshahi, an Iranian immigrant who rose to the top job at online travel provider Expedia, was asked to tame Uber’s raucous workplace culture and its boom-or-bust financial model. Both chief executives were respected in their fields but largely unknown outside. And both had solid reputations as business operators capable of increasing profit at a steady pace and earning accolades from public investors.

Mathrani was born into a wealthy family in India. In the early 1980s, his father sent him to the prestigious British boarding school Eton, but he soon left to attend public high school in suburban Philadelphia as an exchange student, Mathrani recounted during the 2019 awards ceremony speech. By age 20, he had earned engineering and business degrees from Stevens Institute of Technology, whose campus in Hoboken, New Jersey, overlooks the New York City skyline.

His first foray into real estate came when he made $20,000 from flipping an apartment he’d bought for $55,000 two years earlier. For a young engineer, that was a lot of money, Mathrani said in the speech. “Wow, I made 20 grand, hallelujah,” he recalled thinking at the time. “Real estate is a good business!”

Mathrani said he applied for whatever real estate jobs he could find. He was hired as a mall designer and began rising through the ranks. In 1994, he went to Forest City Ratner, the development company owned at the time by real estate titan and former Brooklyn Nets owner Bruce Ratner, who would become one of Mathrani’s mentors, according to Women’s Wear Daily. In 2002, Mathrani joined Vornado Realty Trust, the largest owner of real estate in New York City, where he ran the company’s retail division.

Eight years later, the call came to lead GGP. There, Mathrani had to overcome the aftershocks of the recession, a retail industry in decline and the sharp rise of Amazon. com. Mathrani focused on high-end properties and courted internet-native brands like Warby Parker and Tesla to his malls. He was rewarded by becoming one of the highest-paid executives in real estate.

In broadcast interviews and speeches, Mathrani is soft-spoken and understated. For the speech last year, he wore a plain suit, patterned tie and rimless glasses, his hair slightly out of place, looking the part of a college professor. He spoke about his fortune in life and finding success in America.

In a statement, Mathrani said WeWork “has redefined how people and companies approach work with an innovative platform.” Under Mathrani, WeWork will refocus on office rentals and walk away from passion projects started by Neumann. It has sold business units and other holdings, including a large stake in female-focused co-working startup the Wing. WeWork also said it would terminate about 2,400 jobs.

Staff morale at WeWork is low, and it’ll likely take years to get the company’s finances in order. A recent business plan set a target for positive cash flow by 2023. It could take even longer to change the company’s image in the minds of public investors.

Mathrani’s role at WeWork is designed to complement Claure, a longtime telecommunications executive who was abruptly thrust into the WeWork debacle a few months ago when he was named chairman. Claure recently tweeted a photo of an inspirational message that he said reminded him of his first few days learning the real estate industry. The message read: “Be brave enough to suck at something new.” – Bloomberg