In these days of remote working, try catching a colleague’s eye over Zoom 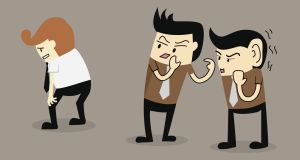 Gossip can sometimes get a bad name but it binds workers together, helps them understand which behaviours are acceptable, warns them away from a duplicitous colleague.

Almost four months into homeworking and I’d like to say that I miss chance discussions with colleagues about the shape of the economic recovery (U, V or W) or the creativity sparked by serendipitous chat. But that would be a lie. What I mourn is the gossip: the shared speculation over a colleague’s frostiness; chance encounters in corridors and kitchens.

Remote working has turned many conversations transactional. I miss the nuance, the sly asides that pique your interest. Try catching a colleague’s eye over Zoom.

Dustin Seale, a partner at Heidrick & Struggles, the headhunter, says it is tough at the top, too. Leaders tell him they cannot “see or hear the gossip that is going on throughout their business or even industry [and] are losing the ‘feeling’ for how things are going”.

I never trust people who say they don’t gossip. It indicates a superiority complex or worse, a lack of interest in people.

Gossip is maligned as spiteful, loose and spread by women. Sexist twaddle as it turns out. Last year researchers found “women engaged in more neutral gossip than men, and younger people tended to negatively gossip more than older people”. You can dress up the football transfer window all you like but see it for what it is: weeks of gossip about job moves.

Lockdown has meant that people expect their partners to fulfil multiple roles, including best friend, gossip buddy, co-worker, and sous-chef

Megan Robbins, one of the authors of the paper, describes gossip as a mark of curiosity and sociability. “It’s about exchanging information...most gossip is to find out about the world.”

It binds workers together, helps them understand which behaviours are acceptable, warns them away from a duplicitous colleague.

I have tried to enrol my co-worker of the past four months, aka my partner, in workplace gossip. The other night I relayed news of job moves and watched as his face registered a mix of panic (scrambling to decode if this was good or bad news, worrying that he would be upbraided for not paying attention) and boredom (he did not give a toss).

Jennifer Petriglieri, author of Couples That Work, says such attempts are futile.

Social media has partially filled the gossip void. Twitter, the virtual water cooler, has become such a time-suck I have deleted it from my phone

“Your partner doesn’t know the cast of characters at your work well so cannot join in. It’s the shared nature of gossip that attracts people to it. Gossip is not about you telling someone else a story, it’s about you talking about the story together.”

It also puts undue stress on to a partner. Lockdown has meant that people expect their partners to fulfil multiple roles, including best friend, gossip buddy, co-worker, and sous-chef, she says.

When it comes to gossip, online socials among colleagues are hit and miss. There are competitive talent shows, or bake-offs where everyone eats their own cake. These may be accompanied by simultaneous commentary via WhatsApp. Though one friend who works in financial services complains that her work calls, instant messages and emails are monitored for compliance so people don’t speak so freely.

Social media has partially filled the gossip void. Twitter, the virtual water cooler, has become such a time-suck I have deleted it from my phone.

I suspect the centre of gossip gravity has shifted away from the office and instead closer to home. One friend confesses to lurking on NextDoor, the neighbourhood social media platform, which since lockdown has exploded with local tittle-tattle. Another, whose child has returned to school, has overturned her previous dump-and-run policy and now lingers outside trying to sniff a whiff of intrigue.

There is also a supply problem. In the coronavirus era, gossip is polarised. Either grim news about job losses and sickness – or a continual loop of childcare, parental care, drinking, baking and social distancing rules.

Freelance friends insist there is still work gossip to be had beyond the office. Yet Alex Soojung-Kim Pang, the author of Shorter, who has looked at reducing the working week, says the workplace underpins one significant strand of gossip: puzzle-solving. This is the act of turning into Agatha Christie characters trying to determine why “Brenda from HR [is] in line at Pret with Arthur from legal, or two department heads were having an argument but got quiet when the elevator door opened”.

If anything is going to get me back to the office, it is the lure of such a sight. – Copyright The Financial Times Limited 2020