High Court ruling may have serious implications for thousands of workers, Ictu warns 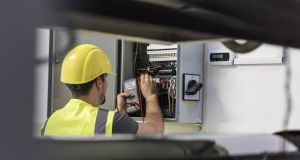 The High Court on Tuesday struck down a law providing for certain minimum pay and entitlements for electricians. File photograph: Getty Images

A High Court ruling declaring parts of the State’s industrial relations legislation to be unconstitutional and rendering sectoral employment orders to be invalid could have very serious implications for tens of thousands of construction workers, the trade union movement has said.

The Irish Congress of Trade Unions (Ictu) said on Tuesday night that, on behalf of the trade union movement generally, it “will continue to represent its membership and will insist on the preservation of the pay, terms and conditions of employment of these workers in line with those currently applying”.

It was responding after the High Court on Tuesday struck down a law providing for certain minimum pay and entitlements for electricians, after smaller electrical contractors had brought a challenge to the issuing last year by the Government of a sectoral employment order setting out minimum pay rates and pension and sick pay entitlements in the electrical industry.

The Department of Business, Enterprise and Innovation said the detailed judgment was currently under review. It said the department was not in a position to comment on the ruling until the matter had received proper consideration.

Labour Party employment spokesman Ged Nash said the case must be appealed to the Supreme Court.

“This is not the first time in our history that the High Court has decided to take issue with the constitutionality of legislation passed by the Oireachtas that seeks to treat workers more fairly and support good business practice. The case, and this judgment, involves very significant matters of public policy and public interest and the judgment must be appealed to the Supreme Court.

“In the meantime, the Oireachtas ought to urgently pass a short piece of legislation to restore and confirm the three sectoral employment orders currently in place which cover the electrical, mechanical engineering and construction sectors.”

1 If tourists are such pariahs should we not be testing them on arrival?
2 ‘My rent here is so low it’s a joke’
3 Varadkar to meet banks in row over interest on mortgage payment breaks
4 Belgium helps Ireland to a Brexit boon
5 WeWork on track for profits in 2021, says chairman
6 ‘Sad day’ for House of Ireland as tourism retailer goes out of business
7 This charming man: how Paschal Donohoe won the Eurogroup presidency
8 So you want to invest in the stock market: what will it cost?
9 AIB to compensate another 1,100 tracker mortgage holders
10 Can Grafton Street stop the flood of closures?
Real news has value SUBSCRIBE