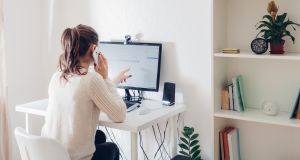 Overall, 21 per cent of all respondents said they feel lonely and isolated. Photograph: iStock

Irish workers are putting in extra hours and experiencing rising stress levels as remote working during the coronavirus pandemic blurs the lines between home and work life, a new survey has found.

The study from from networking site LinkedIn found Irish workers were putting in the equivalent of an extra week’s work – 38 hours – per month due to the current arrangements, which has seen thousands of employees work from home to help curb the spread of coronavirus.

The survey also found the past nine weeks had taken a toll on workers’ mental well-being, with more than half finding the remote working set-up made them feel stressed out. The most affected age group was the under-34s, with 70 per cent of respondents under-24 reporting they felt stressed or anxious and more than 63 per cent of 25-34-year-olds experiencing increased anxiety levels.

A higher number of men said they were affected by stress, with 61 per cent of male respondents reporting feeling stressed, compared with 54 per cent of women.

There were other concerns to take into account. More than 40 per cent are worried that they will be made redundant after the lockdown, and 43 per cent said they felt under pressure to answer emails and calls quicker than usual or be visible online. Some 12 per cent were concerned about how their performance was being judged while working out of the office.

“Covid-19 has impacted how we all work, not least those heroes on the front line. Whilst it is a very different set of challenges, for those of us who are fortunate enough to work from home, we are seeing the impact this is having on our mental health,” said Lisa Finnegan, senior HR director at LinkedIn.

But despite the additional stress caused by remote working, more than half want to continue with some sort of flexible working arrangement when the lockdown ends, including the option to work from home. A third said they would like to see video conferencing replace meetings.

LinkedIn surveyed 2,000 adults in Ireland who are currently working from home due to the Covid-19 lockdown.