Governments should demand better working conditions in sectors that are growing 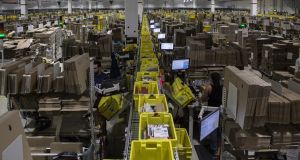 Retrain and “find something new” was the breezy message from the White House last week to 30 million or so Americans on jobless benefits. This wasn’t just a tone-deaf piece of advice. It was a reminder that labour markets are about to enter a new phase, and not just in the United States.

Societies are coming out of lockdown and policymakers do not want to pay millions of people to stay idle indefinitely. Economists have begun talking about the need for a vast reallocation of workers from companies and sectors that are no longer viable to ones that will prosper in the age of coronavirus. But sending people into the economy now with just a promise of some retraining is a little like shoving them out into a hurricane with a voucher for an umbrella.

The problem is most acute in the US, where joblessness has rocketed and people’s state unemployment benefits (which are usually fairly low) have been topped up by $600 a week from the federal government. Roughly two-thirds of Americans who became unemployed in the pandemic are receiving more in benefits than they were paid in their jobs, according to economists at the University of Chicago. For one in five, their income has doubled. The poverty rate actually seems to have fallen since the crisis hit.

You know there is something wrong with your economy when it’s more impoverishing to be in work than out of it. Republicans believe that benefits are too high. They oppose extending the $600 top-up when it expires later this month, saying it creates a disincentive to work. The other interpretation is that far too many jobs in America pay poverty wages.

The current benefit system is hardly optimal, but a drastic cut in incomes for 30 million people would be painful not just for recipients but also for the fragile US economy. A reconfigured but still-generous benefits system could help to address America’s low-pay problem. Rather than make people desperate enough again to take on bad jobs, decent unemployment benefits could force employers to offer better pay and conditions to lure applicants.

As economists Daron Acemoglu and Robert Shimer have argued, higher unemployment insurance tends to encourage people to apply for better quality jobs, and employers to create them. Desperate people also take risks with their health, like going to work when they are sick, which is not what America needs as it struggles to control the pandemic.

Much of Europe and Australasia is in a better position. Most governments have avoided US levels of unemployment by setting up furlough schemes. But they are also starting to worry that this support could hold back the recovery, by trapping people in “zombie jobs” rather than encouraging them to move into expanding parts of the economy.

Support must be withdrawn gradually and only as economies begin to recover, avoiding arbitrary cliff edges. Economists’ sterile language about worker “reallocation” also needs to be tempered with a dose of reality. An advert for two bar jobs in London this month drew 484 applications. There is nothing wrong with offering workers help with reskilling and job searches, as UK chancellor Rishi Sunak promised this month. But no amount of CV polishing can overcome a shortage of jobs. While unemployment is high, every government should focus on boosting new jobs through macroeconomic stimulus and even job-creation schemes.

Policymakers should also try to improve working life in sectors that are growing as a result of the pandemic. In retail, the shift to online shopping will probably accelerate now more people are accustomed to it, especially while infection risk lingers. This means jobs in shops – never well paid but often sociable and well liked – will be replaced by jobs in distribution warehouses and delivery vans. Such work is often insecure, non-unionised, electronically surveilled and highly pressured, even in countries like Germany where worker protections are generally strong.

Governments have handed online retailers a boon: by outlawing physical shops during lockdown, they forced many customers to turn to Amazon and its online rivals. Government should now make some demands of the sector in return. Improving warehouse and delivery jobs will require different approaches in different countries, but there will never be a better window of opportunity.

Governments cannot pay people not to work forever. But at a time of extraordinary economic dislocation, their responsibility is not just to get people ready for the jobs of the future, it is to get the jobs ready for the people.