The big city offers a deeper pool for work, education and even romance 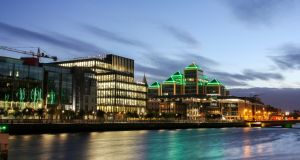 A doubling of city size raises productivity per head by 3 per cent to 8 per cent, depending on the country. That implies people in a city of 16 million will produce almost 30 per cent more than those in a city of 500,000. Photograph: iStock

Working from home during Covid-19 has given birth to a dream and a nightmare.

The dream is to move to the countryside and still earn a white-collar wage; cutting deals while pruning the garden, pitching prospects from a ski chalet or doing the accounts before a stroll along the beach. The nightmare – abandoned offices, empty restaurants and collapsing property values – is for those who own and rely upon cities.

Urban doom has been prophesied many times before, for example after the 9/11 terror attacks in New York, but video conferencing over fast internet connections makes it seem more plausible this time around. “NYC is dead forever,” according to former hedge fund manager James Altucher.

But while the fear is understandable, it ignores the vast gains in wages and productivity fostered by cities, which arise in ways that teleworking cannot replicate. Sell up and move to the countryside at your peril. The city will be back.

That cities increase productivity is well-documented. A doubling of city size raises productivity per head by 3 per cent to 8 per cent, depending on the country. That implies people in a city of 16 million will produce almost 30 per cent more than those in a city of 500,000.

Urban density, as well as city size, also tends to boost productivity. Higher labour productivity leads to higher wages, offset to a greater or lesser degree by the cost of urban housing.

However, productivity has not collapsed during Covid-19, even though workers have been locked up in their homes.

Perhaps, then, the city is just a collection of highly educated people and the office a way to co-ordinate them? After all, if staff can see each other, talk to each other, and work in shared documents over the internet, is there any need for physical proximity?

The evidence on exactly how cities raise productivity suggests that yes, there is.

One reason is that workers learn in cities. The economists Jorge de la Roca and Diego Puga tracked people who moved between large and small cities. Around half of their gain in productivity came simply from the fact of working in a bigger city.

But the other half accrued over time as the employee learned: if they moved back to a smaller city, they kept that part of the productivity gain as well. In a big city you can work with the best, get yelled at for your mistakes, and find out what it takes to be national or world-class. Try doing that on Zoom.

Companies learn too. A worker hired from your rival down the street brings a new perspective on how to do things. An award ceremony with your competitors motivates you to improve.

That is why, when an area wins a new manufacturing plant, the productivity of local rivals rises by 12 per cent over the next five years, according to estimates by Michael Greenstone, Richard Hornbeck and Enrico Moretti.

Large cities allow for a multitude of specialist services and a better matching of workers to jobs, and companies to customers. A derivatives trader in Louisville, Leeds or Lyon will surely find a use for their skills, but they are unlikely to be half as productive or well-paid as in London, New York or Singapore.

Nor is it just about work: for education, medicine and even romance, the pool is deeper in the big city.

Finally, cities promote innovation. There are various studies of technology clusters that show how inventors tend to live near one another.

Bumping into each other

A recent study by David Atkin, Keith Chen and Anton Popov uses mobile phone location data to show how Silicon Valley workers bumping into each other in coffee shops leads to an increase in patent citations by their firms. Video conferencing companies, by contrast, have gone to great lengths to secure their calls against chance encounters.

All of these effects work over time. The existing web of job matches and corporate knowledge does not vanish during a few months of working from home. That helps explain why office productivity has held up during Covid-19. But new learning, innovation and matching can only take place when urban life resumes.

Another reason to live in the city is the amenities of art, music, food and theatre. They may suffer greater long-term damage from Covid-19. As a result, people who live in cities solely for the amenities and not the economic opportunities, such as retirees, may choose to leave.

But to the extent that they do leave, it should reduce the price of urban housing, attracting young people who are there for the jobs.

Ultimately, everything depends on Covid-19. All the mechanisms that make cities so productive are still there, but they are dormant until it is again possible to go to the office, attend a job interview or meet up in the coffee shop.

If the pandemic were the first of many, or if coronavirus infection remained a constant threat, then the city would be in trouble. But all past experience suggests there will eventually be a treatment, a vaccine or the pandemic will burn itself out.

Once that happens, the strengths of the city will reassert themselves and everyone will trudge back to the office. In the city, they will enjoy productive lives and dream, just occasionally, of how sweet it would be to work from home in the countryside. – Copyright The Financial Times Limited 2020