An Post and RTÉ among bodies given Business to Arts awards 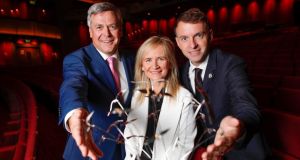 Businesses from An Post to Bank of Ireland and Cartoon Saloon have been recognised for their work with the arts in the annual Business to Arts awards.

The awards attracted a record number of entries this year with the 1916 commemorations featuring prominently, accounting for 15 per cent of all nominations.

The awards, sponsored by Allianz and celebrating their 25th anniversary, recognise business, artists and arts organisations that “develop and sustain creative partnerships”, according to Business to Arts chief executive Andrew Hetherington.

Minister for the Arts, Heritage, Regional, Rural and Gaeltacht Affairs Heather Humphreys said it was great to see the number of nominations for cultural events associated with the centenary of 1916.

Bank of Ireland won the Best Staff Creative Engagement award for a programme that saw staff who always wanted to play a musical instrument in public realise their dream, raising money for Barnardos at the same time.

RTÉ received a special 25th anniversary award for its long-term contribution to and support for development of the arts.

Lucy Kellaway: We will miss the office if it dies