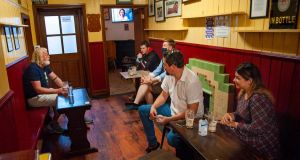 Drinkers at a Cork pub, following the re-opening of ‘wet pubs’ outside Dublin in September. Photograph: Daragh Mc Sweeney/Provision

Covid infection rates in three Irish cities jumped a fortnight after wet pubs reopened in September, according to an EY study.

The Sunday Times reports that infection rates in Cork, Galway and Limerick jumped to three times the national average. There was no similar increase in Dublin, where wet pubs remained closed, the paper reports, saying the study was a factor in the decision not to open wet pubs ahead of Christmas.

Press Up co-founder writes to Government

Meanwhile Press Up co-founder Matt Ryan has written an emotional letter to the Government over the prospect of a December without normal trade at the group’s 57 outlets.

The Business Post reports that the letter – sent last week after Nphet advice to allow only takeaway services from pubs and restaurants but before the Cabinet decision on reducing restrictions – said he was “worn out. I am beaten to a pulp. I have killed myself to stay up and running in any way I can to survive”.

The Sunday Independent reports that building materials giant, CRH, has repaid all Covid-19 furlough support it availed of worldwide, including in Ireland. “I think business has a role to play in society and and that we felt that was the right thing to do,” chief executive Albert Manifold said on an analyst call.

The Central Bank has put Irish property funds on watch over concerns that an investor exodus could trigger a liquidity crisis, adding further pressure to Ireland’s banking sector, the Sunday Times writes.

Uncertainty over The Square

A sign of fragility in the commercial property sector comes in the Sunday Independent, with news that the company that owns the freehold interest in The Square Tallaght shopping centre has identified a “material uncertainty” around its ability to remain in business for the foreseeable future as debt falls due over the next year.

Oaktree Capital Management is reported to be lining up a bid to take over the Colony Capital interest in Johnny Ronan’s Salesforce tower and Facebook campus developments in Dublin, according to the Sunday Times. It has already replaced Colony as main funder of Ronan’s RGRE plans for the Irish Glass Bottle site.

Also in the Independent, aviation veteran Ulick McEvaddy has written to the Chinese ambassador in Ireland warning that China’s “ransoming” of aviation leasing executive Richard O’Halloran is a “red flag” for leasing companies doing business with China.

The Sunday Times also reports that the European Commission has begun to “lean on” Brexit negotiator Michel Barnier to strike a trade deal with Britain.

Finally, the Business Post reports that bike locker business, Cyc-Lok has secured deals worth more than €1 million so far this year and is looking to expand into the US market in the coming months.

Finally, the Business Post reports that bike locker business, Cyc-Lok has secured deals worth more than €1 million so far this year and is looking to expand into the US market in the coming months.