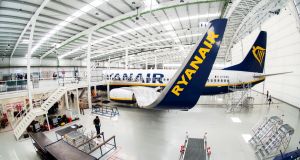 Build-to-rent company Urbeo Residential has invested more than €400 million in nine deals in its first year in operation, which will deliver a portfolio of 1,300 rental units. Joe Brennan has the details.

Ryanair could pay up to $336 million for extras that it has asked the aircraft manufacturer Boeing to buy and install on 210 new 737 Max aircraft that the Irish carrier could buy from the US manufacturer.

Profits declined at Irish sportswear manufacturer O’Neills due to a shortened GAA championship season. Brexit is also impacting the company, which operates on both sides of the Border. Gordon Deegan has the details.

Tullow Oil’s trading update yesterday bombed as its shares traded at levels not seen since 1999. Cantillon examines the reasons behind the share slump and explains why it could now be on the radar of bargain-hunting rivals.

In media and marketing, Laura Slattery looks at some of the whoppers that have been told in political advertising campaigns in the UK general election.

In our weekly personal finance feature, Joanne Hunt has some money tips for your Christmas shopping that are designed to help you avoid the January blues.

1 Fair Deal nursing homecare leaves little for bills and gifts
2 Getting out from under ‘never-ending’ Celtic Tiger debt burden
3 Portugal set to curb tax breaks for wealthy foreigners
4 Pensions row fix could threaten future of State payment, actuaries warn
5 US budget deficit forecast to blow out by mid-century
6 Tax and spend: What have FG done for your pocket?
7 Pound dips as Bank of England decision looms
8 Pilita Clark: When a rude boss keeps you waiting, why not walk out?
9 Apple reports sales and profit growth over Christmas
10 Will the next decade be a better one for value investors?
Real news has value SUBSCRIBE