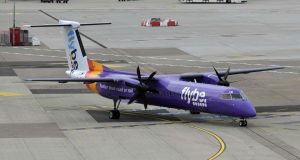 However. the move had been welcome by political and business leaders in Northern Ireland.

The new Minister for the Economy, Diane Dodds, said confirmation that Flybe would continue to operate was positive news for the North.

“I have impressed upon the Government in London, at the highest level, the economic importance of maintaining connectivity between Northern Ireland and the rest of the UK. Our unique geographical and economic circumstances mean that any reduction in services has an adverse impact upon businesses and our tourism industry”.

Flybe was kept afloat on Tuesday after its shareholders agreed to invest more money while the government provided support, reported to involve the deferral of a tax bill.

Mr Walsh, chief executive of the company which also owns British Airways, criticised the government help for a privately-held company, saying the taxpayer was picking up the tab for mismanagement of the airline.

“This is a blatant misuse of public funds,” he said in a statement.

British Airways competes against Flybe on some routes and Flybe is owned by a group which includes Virgin Atlantic, a long-term BA rival.

Commenting on the rescue deal, Angela McGowan, Northern Ireland Director of the Confederation of British Industry (CBI) said: “The news about the Flybe rescue plan is welcome and will be a massive relief to all the staff who work at the company and communities who rely on the vital links Flybe provides.

“The new Government has a huge opportunity to look at the overall cost of doing business and to support growth through high quality, sustainable infrastructure. That’s what will ultimately drive shared prosperity and level up growth across the UK.”

The rescue was also welcomed by NI Tourism Alliance who said that “as an island off an island, air connectivity is vital for NI to grow tourism and business and Flybe provides essential regional links”.

Under pressure to deliver on an general election promise to help improve transport links outside London, the Conservative government agreed to help Flybe, in contrast to a similar test last September when it took no action to help save the much larger travel company Thomas Cook.

Flybe connects smaller UK cities such as Southampton and Newcastle and its network of routes includes more than half of UK domestic flights outside London.

Mr Walsh has also written a letter to transport minister Grant Shapps, the BBC reported, outlining his concerns about the Flybe deal. – Additional reporting by Reuters