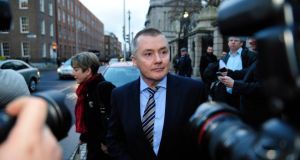 Virgin Atlantic has written to the Oireachtas Committee on Transport and Communications expressing concern about the possible impact of IAG’s proposed €1.36 billion takeover of Aer Lingus on services between Britain and Ireland.

Speaking after addressing a Merc Partners business breakfast in Dublin’s Intercontinential Hotel, Mr Walsh said he would be delighted if Virgin appeared before the committee, where he himself gave evidence in February.

“I think it would be very interesting for Virgin to appear before the Oireachtas transport committee and explain their interest in the Irish market,” he said. “They don’t fly here, as far as I am concerned and aware, they’ve never shown any interest in flying into Ireland or serving the Irish market.

“It would be great if they did but that’s not their track record and given that Virgin is effectively controlled by Delta, you’ve got Delta flying into Dublin and Shannon, so I can’t see Virgin doing that.”

Mr Walsh agreed that Virgin’s intervention in the Aer Lingus takeover debate is aimed more at competition regulators in Europe, who will have to approve any deal, rather than the Republic’s Government or politicians.

“It’s not unusual for Virgin to see if they can get something out of the process,” he said. Mr Walsh and Mr Branson have clashed regularly in the past, most recently over his claims that Delta’s minority stake in Virgin gives it effective control over the airline.

Along with Virgin’s intervention, US property magnate, Donald Trump, owner of Doonbeg Golf Course in Co Clare, has written to the Government arguing against the sale of the State’s 25.1 per cent stake in Aer Lingus to IAG.

Mr Walsh said that he is not surprised at the number of people who have jointed the debate and argued that it reinforced IAG’s view of the strength of the Aer Lingus brand.

“The more people that express their views in relation to this the better as far as I am concerned,” he said. However, he stressed he was more interested in interventions in Ireland by people that understand the issues involved.

Representatives of IAG are meeting Government officials today to discuss the group’s proposed €2.55 a-share offer for the Irish airline. Mr Walsh said he would not be attending that meeting and was only in Dublin to honour a long-standing committment to Merc Partners.

IAG owns British Airways and Spanish carriers Iberia and Vueling. Aer Lingus’s board has already said it is prepared to back the group’s proposed offer.