Talks over a €9bn German bailout of Lufthansa hit a snag 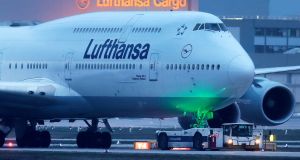 Lufthansa is seeking to weather the coronavirus pandemic and what is expected to be a protracted travel slump.

Talks over a €9 billion German government bailout of Lufthansa have hit a snag and will continue over the weekend, a German newspaper reported on Friday.

The issue involves a demand from the government that Lufthansa accept delivery of all planes it has ordered from Airbus, putting a significant financial burden on the troubled airline group, Handelsblatt reported, citing unnamed sources.

The planes would cost the ailing carrier more than €5 billion ($5.5 billion) in the coming three to four years, which Handelsblatt said would make the airline’s recovery practically impossible.

The dispute means there will be a further delay to the rescue package. A meeting of Lufthansa’s supervisory board, which was due to discuss the terms on Friday, has been postponed until Monday, the report said.

A German government spokeswoman, when asked about the report, said there was no update on the issue. Lufthansa earlier Friday also declined to comment on the status of talks.

Lufthansa, seeking to weather the coronavirus pandemic and what is expected to be a protracted travel slump, had said on Thursday it was in advanced talks that would see Germany take a 20 per cent stake.

German cabin crew union UFO said on Friday it was “regrettable” that negotiations with the government did not appear to involve provisions to preserve jobs.

“We would really wish that the government, when it provides money to help Lufthansa, would also help the employees,” UFO spokesman Nicoley Baublies told Reuters TV.

UFO members were prepared to accept hardship but only if jobs could be preserved, he said. – Reuters

1 Aer Lingus confirms job cuts due to ‘decimation in demand’
2 Why is Germany suddenly embracing its inner Keynesian?
3 Prospect of foreign travel highlights remaining restrictions here
4 ‘I have a talent for justifying purchases’
5 Property price drop of up to 12% this year a ‘reasonable’ assumption – McDonagh
6 Help, I’ve no PRSI stamps – can I still get a pension?
7 National accounts record the calm before the storm
8 Bad posture working from home easy to acquire
9 Stocktake: Bored punters are dabbling in stocks
10 Builders may end up in complex disputes following suspension of most construction
Real news has value SUBSCRIBE