Ryanair chief Michael O'Leary says the airline has seen "very strong" bookings for the first two weeks of July across its network, but the prospect of 3,000 job losses still looms if staff fail to agree to pay cuts. Video: Reuters 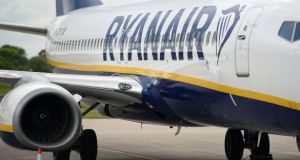 Ryanair is still planning around 3,000 additional job losses if it cannot agree pay cuts with pilots and cabin crew, a spokeswoman for the airline said on Wednesday. Group chief executive Michael O’Leary earlier told the BBC that the airline had announced about 3,500 job losses, but the spokeswoman later clarified that.

Ryanair’s plans to cut 3,000 pilot and cabin crew jobs had not changed. Europe’s biggest budget airline has cut more than 250 staff from its offices around Europe and the additional potential cuts would be split between pilots and cabin crew, with whom the company is currently in pay negotiations.

“We’re looking for 20 per cent from the best paid captains, 5 per cent from the lowest paid flight attendants and we think if we can negotiate those pay cuts by agreement, we can avoid most but not all job losses.” Mr O’Leary told BBC TV.

The Irish Times reported earlier this week that the carrier could close bases at Cork and Shannon airports and let go up to 120 pilots after talks with unions on job cuts ended inconclusively.

Ryanair is restoring 40 per cent of its schedule from Wednesday, along with other European carriers seeking to rescue part of the traditionally busy summer holiday season. – Reuters