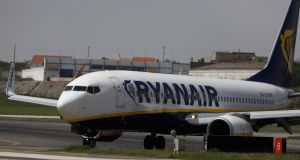 Forsa official Ashley Connolly said that the cabin crew agreement marked a milestone in the development of collective bargaining at the airline. Photograph: Rafael Marchante/Reuters

Fórsa will be the only trade union to represent Ryanair’s 200 or so directly-employed Irish-based cabin crew following a deal struck between the pair.

The union confirmed on Thursday that it has signed an agreement with Ryanair giving it sole negotiation rights for directly-employed Irish-based cabin crew.

The news comes as members of the Irish Airline Pilots’ Association (Ialpa) – also part of Fórsa – vote on an agreement designed to end a dispute with Ryanair.

Ryanair directly employs about 200 cabin crew of a total of 700 working for it in the Republic.

Agencies Crewlink and Workforce, contracted to the airline, employ the other 500.

Fórsa has members in the airline and the agencies. Union official Ashley Connolly indicated that it would also begin talks with Crewlink and Workforce.

Ms Connolly described the cabin crew deal as a milestone in collective bargaining at the airline.

“This is a very positive development and we’re proud to be in a position now to represent Ryanair cabin crew,” she said.

She added that Fórsa hoped to grow membership in the airline and improve crews’ pay and conditions.

Ryanair said that it looked forward to working with Fórsa and its elected company council – made up of the staff themselves – to conclude a collective labour agreement for its directly-employed, Irish-based crew.

Eddie Wilson, the airline’s chief people officer, pointed out that the company was pleased to sign the deal.

“This is a further sign of the progress Ryanair is making with trade unions since our December 2017 decision to recognise unions, with over 65 per cent of our cabin crew now covered by recognition agreements,” he added.

Ryanair recently signed similar deals for cabin crew in other jurisdictions, including one with trade union Unite covering Northern Ireland and Britain, as well as labour organisations in Italy and Germany.

The airline agreed to recognise pilot and cabin crew unions in December, changing a long-standing policy on industrial relations.

The dispute with 100 of its 350 Irish-based pilots ran for several weeks in July and August, leading to five one-day strikes at the airline.

Negotiators from both sides last week agreed terms for resolving the row. Ialpa-Fórsa is balloting members on the proposals.

Early last month, Fórsa hosted the launch of a charter of demands by Ryanair Cabin crew from around Europe that was backed by the International Transport Workers’ Federation.

The airline said in response that cabin crew were paid €40,000 a year and had rosters that exceeded all safety standards.