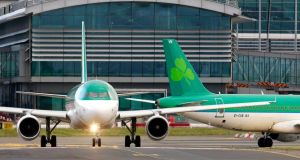 London City Airport has received planning approval for a £200 million investment which will see flights operations move from 70,000 to 111,000 per year. The terminal building will be extended, and a new taxi-way and additional aircraft parking stands will be built. Three airlines operate on the Dublin to London City route: CityJet, Flybe and British Airways. Best value operator is Flybe, with fares in March for €84 return.

Hotel room rates up 9% in Ireland

Average room rates for business hotel bookers HRS saw big percentage rises across the UK and in Ireland, where prices were 9 per cent up on 2013. Top increase in Europe is Athens with a 35 per cent rise, from a low base. Moscow has been knocked from the top spot as most expensive for hotel rooms, with New York now taking the lead. Oslo also experienced a 13.3 per cent decline. Prague, Budapest and Warsaw are the best value for hotels in Europe.

Business class to US from £649

French airline La Compagnie will begin a business class only service from Luton to Newark in April. The boutique airline will compete on price using a 74-seat Boeing 757-200 in a 2x2 configuration. Opening offers on the three times weekly service are from £649. The airline began services from Paris CDG to Newark last July.

Starwood Hotels and Resorts opened 74 new hotels in 2014, representing around 15,000 rooms in 26 countries including the US, China, Macao, Tajikistan, Lebanon, Bahrain, Germany and Thailand. It also signed 175 new hotel management and franchise agreements, adding to the existing 1,200 properties in more than 100 countries. 2015 is expected to be another year of solid growth.