Over 70% of overseas visitors spend nights in just five counties 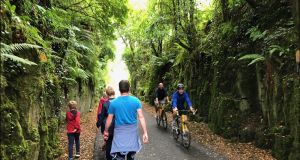 The head of Fáilte Ireland has warned that the attractiveness of Ireland as a holiday destination could be damaged unless a regional imbalance in the tourism industry is addressed.

Mr Kelly said the industry was facing the prospect of congestion at popular tourism hotspots, which could significantly affect Ireland’s attractiveness as a destination unless more tourists were encouraged to visit other parts of the country.

“If we cannot ensure a greater regional spread of tourism activity the sector’s potential for generating revenue and jobs will remain untapped in many parts of Ireland where there is capacity for more tourism growth and a need for job-creation,” said Mr Kelly.

He said spreading tourists across all regions of the country and extending the tourism season to allow businesses to remain open for longer was the key driver of Fáilte Ireland’s work and strategy.

The domestic market recorded even stronger growth, with the number of domestic holidays up 13 per cent to 10.9 million.

Six out of 10 tourism accommodation providers reported an increase in business last year.

Despite the positive figures, Mr Kelly said Irish tourism was also facing many obstacles and challenges which might surprise many outside the industry.

He pointed out that many businesses were only open for a few months per year, with some only trading for up to 12 weeks.

“We need to continue to support businesses to stay open longer so they can extend their season and thereby increase their revenue and job-creation. To do this we need to create the attractions, events and value offering that will entice tourist to come here beyond the summer.”

Fáilte Ireland chairman Michael Cawley said its emphasis on “experience” brands such as the Wild Atlantic Way was continuing to pay dividends in terms of solid growth in both visitor numbers and revenue.

Mr Cawley said the addition of a fourth brand, Ireland’s Hidden Heartlands which was launched in April 2018, completed “a compelling portfolio designed to meet the expressed requirements of our target customer audience”.

However, he said Fáilte Ireland still regarded the four brands, which also include Dublin – Surprising by Nature, as being at an “embryonic stage in their life cycle”.

“We see much potential to develop them further in the coming years,” he added.

The annual report showed numbers employed in the tourism sector rose by 20,000 last year to 260,000.

It identified greater air access as the main factor in record tourism figures, with particularly strong growth in routes serving the US, Canada, Germany and China.

Mr Cawley also acknowledged that the industry was facing considerable challenges in addition to Brexit, including continuing cost pressures associated with increases in local authority charges and insurance premiums.

“We must not imperil the great strides made in recent years by losing sight of the crucial need to consistently deliver a value-for-money experience to our customers.”

Fáilte Ireland said it had helped last year to secure €204 million worth of international conference and business events this year and in future years, which was €10 million ahead of targets.

The organisation itself recorded a net deficit of €275,000 following expenditure of €140.5 million.

Fáilte Ireland welcomed the announcement, which director of product development Orla Carroll described as “a huge vote of confidence” in the ability of tourism to drive economic growth in rural areas.

1 Boeing identifies new software flaw in grounded 737 Max
2 Dublin housebuilder records €11m gain after striking deal with bankers
3 'My wife has a PhD in haggling. She thinks it should be an Olympic sport'
4 Irish people like nothing more than being bribed with their own money
5 GoMo is being investigated by advertising authority
6 Irish company that collects subscriptions for porn sites records €3m profit
7 Hogan warns Britain on US trade deal as EU set to impose tariffs
8 Barclays to cut 100 senior roles as lender seeks to rein in costs
9 Markets: IT group with Belfast HQ enters North’s £1bn league
10 ‘We stuck our heads in the sand for a long time’
Real news has value SUBSCRIBE