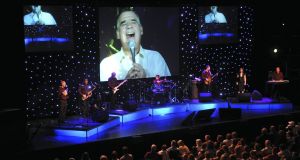 The late Joe Dolan performs at the INEC, in Killarney: the owners of the venue saw profits fall in 2018. Photograph: Don MacMonagle

Operating profits at the hotel group which operates the INEC in Killarney last year decreased by 7 per cent to €1.32 million.

However, exceptional costs of €280,083 along with interest payments of €1.1 million and investment losses of €1.1 million resulted in the Gleneagle group recording a pre-tax loss of €1.22 million.

Numbers employed by the group decreased from 418 to 401 and staff costs last year increased to €11.7 million from €11.6 million.

According to the directors, they are satisfied with the performance of the group in the year and anticipate that the group will be profitable and will maintain market position in the coming year.

The group’s shareholder funds totalled €3.2 million at year end that included a cash pile of €1.1 million.

The operating profit last year takes account of non-cash depreciation costs of €1.14 million. Pay to directors totalled €565,200 made up of €481,558 in remuneration and €83,642 in pension contributions.

A note attached to the accounts that a provision of €319,787 has been made in respect of public liability actions brought against the group.