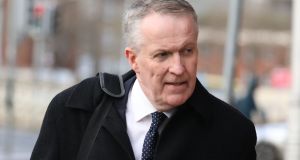 Former Ryanair chief operating officer Peter Bellew; “He [Mr O’Leary] started threatening me with litigation on the phone, so the call ended with his threats.” Photograph: Collins Courts

Ryanair’s departing chief operations officer Peter Bellew told the High Court that the airline’s boss, Michael O’Leary, roared and shouted at him, and said “you are f***ing useless,” at meetings of the airline’s senior executives.

The airline is suing Mr Bellew to prevent him joining rival EasyJet as chief operations officer in January.

It says that he agreed not to work for any competitor for 12 months after leaving Ryanair, when he accepted 100,000 share options in the Irish company in 2018.

On his second day under cross-examination by Ryanair’s senior counsel, Martin Hayden, Mr Bellew said he did not accept Mr O’Leary’s criticism of his performance as chief operations officer.

He described the chief executive’s behaviour towards him as “unreasonable” and said that Mr O’Leary had screamed at him during meetings of Ryanair’s senior executives.

Mr Bellew told the court that as chief operations officer, he had reached all the targets set for him by Mr O’Leary, and that the Ryanair board had no issue with his performance. He said that it was “very clear” that Mr O’Leary wanted him gone.

Replying to Mr Hayden, who suggested that “if Mr O’Leary wanted him gone he would have been gone”, Mr Bellew said that he believed that the Ryanair chief would not have fired him until after the company’s annual general meeting in September 2019.

Mr Bellew maintains that his non-compete agreement with Ryanair is null and void, denies breach of contract and pledges not to share any of the airline’s confidential information with any employer.

He claimed that Ryanair’s 2018 share scheme “didn’t exist”. Mr Bellew signed the non-compete clause as a condition of accepting share options under that scheme.

Mr Bellew told the court that it was dead and gone. “It doesn’t exist,” he said. “It’s not in any set of audited accounts of the company.”

He added that Ryanair’s audited accounts detail every share scheme going back five years, but not the 2018 options.

Mr Bellew was responding to Mr Hayden, who had put it to the airline executive that he understood and accepted the non-compete clause when he signed it in 2018.

He dismissed the 2018 scheme as “worthless” as it was tied to unattainable profit after tax targets. He added that this was why Ryanair had replaced it with a new share option plan begun this year.

At Mr Bellew’s review in March, Mr O’Leary told him that he would withhold the 2019 options unless the chief operations officer’s performance improved over the coming six months.

Mr Bellew accepted that he began talks with EasyJet about the possibility of joining that airline in April 2019.

However, he told the court that he did not make up his mind to leave until July, when Mr O’Leary asked him to go to Vienna and work full time at Ryanair’s Austrian subsidiary, Laudamotion, for six months.

His boss told him in July that his colleagues could look after his duties in Dublin, where everything was going perfectly.

Mr Bellew took it as another sign that Mr O’Leary wanted him out. “I was being cut out as chief operations officer of Ryanair,” he said.

He rejected a suggestion that Mr O’Leary did not ask him to go full-time to Vienna until September, after he had told Ryanair he was leaving.

He said that he did subsequently tell Mr O’Leary on July 18th, the day before EasyJet announced his appointment.

Mr Hayden asked him why he did not tell Mr O’Leary that the British airline intended to announce his appointment, to allow Ryanair the chance to respond.

“He [Mr O’Leary] started threatening me with litigation on the phone, so the call ended with his threats,” Mr Bellew said.