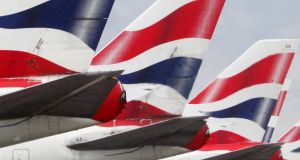 British Airways: will be introducing a Heathrow to San José flight next May

The Hotel Price Index by Hotels. com shows the fifth consecutive year that prices have continued to rise or recover depending on whether you are a guest or a property. Belfast is following close on Dublin with average rates of €125 and an increase last year of 25 per cent.

Globally hotel prices rose by just 1 per cent in the first half of the year except in North American, Caribbean and Latin America.

The only European route to Silicon Valley will operate every day with four classes – First, Club World, World Traveller Plus and economy. Flights will operate on a Boeing 787-9 Dreamliner.

Fares originating in Ireland will be better value than those from the UK. Hilton hotels to end adult video service Bedrooms in Hilton hotels worldwide will become pornography free zones from next year.

The hotel group will end the adult video-on-demand service in all properties by next July.

In recent years Hilton Worldwide has been listed on the US National Centre On Sexual Exploitation’s “dirty dozen list” which lists 12 “leading contributors to sexual exploitation”.

Other brands such as Marriott and Ritz Carlton have already ended the in-room service.

The categories are best short-haul destination, best international conference for the One Young World Summit and best use of event technology or social media.