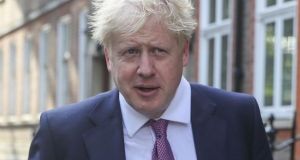 Despite Boris Johnson’s claim there would be ‘no forms, no checks, no barriers of any kind’ under his Brexit deal, companies are bracing themselves for having to fill out complex forms. Photograph: Simon Dawson/Bloomberg

Northern Irish businesses have expressed concern at the heavy administrative burden of having to fill out complex forms for moving goods between Northern Ireland and Britain after Brexit.

Despite Boris Johnson’s claim there would be “no forms, no checks, no barriers of any kind” under his Brexit deal, companies are bracing themselves for the detailed entry and exit summary declaration they will need to fill out under safety and security requirements for the international transit of goods.

Pointing to the risk of hauliers being fined for completing the forms incorrectly, Ms Bastidon said an exit summary declaration required to take goods out of the EU and Northern Ireland by road to the rest of the UK meant companies had to fill out 29 mandatory fields of data out of 31.

Each form could cost between €25 and €30 per haulier and the process will be complicated by the fact that one haulier could be carrying “hundreds of different shipments on board, “putting huge pressure on hauliers to submit all data two hours before a ferry crossing,” she said.

“It’s a massive logistical headache for the logistics sector,” she added.

Concerns about the level of post-Brexit paperwork came one week before the UK is due to leave the EU and ahead of a visit of EU chief Brexit negotiator Michel Barnier to Belfast on Monday.

Stephen Kelly, chief executive of Manufacturing Northern Ireland, which represents industrial businesses across the North, said that businesses simply would not fill out the required forms.

Mr Kelly said there was a massive gap in the understanding about the form-filling and that this lack of understanding “extends into the UK government itself, as high as the prime minister”.

“We are confused about how the prime minister can be so unequivocal in his assertion that there won’t be any checks, controls or paper work requirement while at the same time being so unequivocal that the UK will not be aligned with the EU,” he said.

“At some point this year, those two counter positions will collide and choices will need to be made.”