Some establishments have sought compensation over disruption to their trade 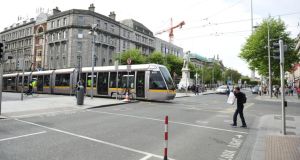 Some commercial and residential premises in the north and south of the city have been hit with significant water ingress in recent months allegedly as a result of preparatory works for the installation of additional light-rail tracks along busy streets.

A spokeswoman for Luas Cross City confirmed that it had received legal submissions calling for compensation. However, any settlements for damages incurred would have to be paid by the relevant contractor responsible for any offending works.

Correspondence seen by The Irish Times shows that over an eight-month period in 2014 and 2015 the Parnell Heritage Bar complained of flooding related to nearby construction activities four times, while numerous business owners on Dawson Street have condemned Luas Cross City for alleged disruption to trade.

“Pipes burst on Dawson Street and our elevators were flooded; we had a real concern for the welfare of our staff. One of our members of staff was in the lift at the time when going down to the basement to have a cigarette and water came into the lift while he was in it,” read an email from New Relic International.

Responding to queries, a spokeswoman for Luas Cross City said many of the afflicted spaces were Georgian basements from the 18th and 19th centuries which were constructed from brick and stone, and were “prone to dampness and poor repair”.

In 2004 some traders on Harcourt Street lodged High Court proceedings as a result of a reduction in clientele allegedly caused by work on the new Green Line, and sources have confirmed that settlements were paid to over a dozen complainants. In recent days traders in affected areas said there had been a “squeeze” on their businesses as a result of the disruptions.

1 How long can Government afford to keep State pension age at 66?
2 Guinness brings out a non-alcoholic version of the black stuff
3 Frank Fitzgibbon stepping down as Sunday Times editor
4 How much will a Covid-19 vaccine cost?
5 Farm lobby seeks EU ban on vegan ‘burger’ and veggie ‘sausage’
6 How on earth do we the calculate the cost of Level 5 for the Irish economy?
7 Paul Coulson plans record $1.8bn Ardagh investment
8 Google's incredible power is the result of decades of regulatory failure
9 Budget 2021: fuel prices rise and high-emission cars hit
10 Irish start-up Wayflyer raises €7.8m in seed funding
Real news has value SUBSCRIBE