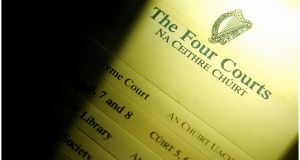 The judge in the case said he would give his reasons for rejection in a reserved judgment..

The High Court has dismissed an application to appoint an examiner to the Ina’s Kitchen Desserts business.

The application was made by Barry Broderick, a director and shareholder in the Whitestown, Tallaght-based producer of mainly chocolate food products.

Mr Broderick was supported in his application by other family shareholders, his brother Bernard and parents Michael Bernard and Ina in whose kitchen the business was started 26 years ago.

The Broderick family between them own 25 percent of the shareholding while a special purpose vehicle company called Starkane Ltd, funded by the BDO Development Capital Fund, owns 75 per cent.

Despite investment and additional loans, Ina’s Kitchens has had financial problems for a number of years and the Brodericks believed it needed the court protection of examinership because it was insolvent with an accumulated debt of €9 million. It would need to be restructured to trade out of its difficulties, it was claimed.

The court heard it has been forced to postpone payments to Ulster Bank, a secured creditor owed €2.6 million and neutral on the petition, and to Revenue, owned some €407,000.

In 2018, it had to get an extension of its facilities from Ulster Bank so as to be able to pay wages to its employees at Christmas.

This year, the company found itself obliged to avail of the Covid-19 pandemic payment for employees, the Temporary Wages Subsidy Scheme.

Starkane strongly opposed the application saying, amongst other things, the Brodericks wanted to use examinership to wrestle back control of the firm, that it had a plentiful supply of finance to meet its requirements and that no one was refusing to trade with it.

Following a hearing last week, Mr Justice Michael Quinn said on Tuesday he was going to dismiss the application. He said he would give his reasons in a reserved judgment next week.

Lawyers for Mr Broderick, Starkane and the Revenue said they would await the written judgment.

In a statement after the case, the Broderick family said: “We await the written judgment before deciding on the appropriate next steps.”

A statement on behalf of Ina’s Kitchen Desserts said the company was “happy” with the court’s decision. “We are excited by the company’s potential to continue to grow through excellence in quality, innovation and service in all aspects of the business,” it added.

The directors of Starkane and BDO Development Capital said: “We remain focused on supporting the management and staff of the company to continue its successful growth strategy, which sees it set for record revenues this year despite the global pandemic,” they added.