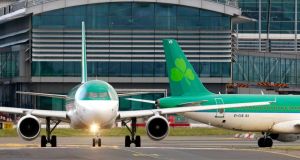 Irish hoteliers optimistic There was an air of optimism at the Irish Hospitality Institute conference on Thursday last, with hoteliers expressing relief as occupancy increases and rates rise. However, warning bells were sounded. To continue the current growth plan Dublin will need more hotels rooms but it is still cheaper to buy an existing hotel than to build one. Fears were also raised about plans for the sale of the Clyde Court and Ballsbridge hotels, which would cut capacity by 400 rooms. New Shannon cargo service Turkish Airlines has been granted permission to operate a cargo-only service from Shannon Airport to Chicago though its subsidiary Turkish Cargo. The service will operate on Fridays, and will carry up to 70 tonnes. The aircraft, an Airbus 330F, can carry high-value consumer goods, industrial equipment, pharmaceuticals and thoroughbred horses.

Turkish Cargo* is using Shannon for refuelling of passenger services to North America.

Enhanced meals in economy class British Airways is going to offer enhanced meals for economy passengers from May 12th on selected transatlantic routes. You could be enjoying Loch Fyne salmon, beef cheeks from Hereford and vegetarian polenta crespelle with mascarpone or the great British breakfast. Prices are from £15-£18, €21-€25.

Europe’s first 4G in-flight service Inmarsat and BA are planning on offering Europe’s first 4G in-flight broadband service. Passengers could use their mobile telephone data plan to access the internet and the service will be launched on UK domestic routes initially. Customers on the Club World London City to New York service that clears CBP in Shannon can already use their mobile phones to receive data.