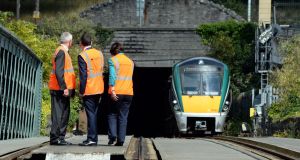 Iarnród Éireann is the ‘new frontline’ in the battle to ensure the adequate funding of public transport in Ireland, Siptu members have heard. Photograph: Eric Luke/The Irish Times.

Iarnród Éireann is the “new frontline” in the battle to ensure the adequate funding of public transport in Ireland, the biennial conference of the trade union Siptu has been told.

Siptu transport division organiser Greg Ennis told delegates in Cork that the union would not be found wanting in supporting its 1,900 members at the State-owned rail company in their pursuit of a “long overdue” pay rise.

Staff at Iarnrod Eireann are currently balloting for strike action as part of a claim for increases of about 3.75 per cent per year - similar to those secured by Luas and Dublin Bus workers after industrial action last year.

Unions have warned that any industrial action on the State’s railways as part of the pay dispute could take place in the run up to the October bank holiday weekend.

Mr Ennis said Siptu members would “vehemently campaign to oppose” the deliberate underfunding of public transport “which is simply designed to manufacture a false environment to justify privatisation, be it in aviation or transport.”

“Enough is enough - and like the recent disputes in the Luas, Dublin Bus and Bus Éireann, Siptu will not be found wanting in fully supporting our 1,900 members in Iarnród Éireann in their pursuit of a long overdue pay increase.”

Delegates also opposed any moves to have the proposed third terminal at Dublin airport operated by the private sector.

The union said the privatisation of the proposed terminal could drive down terms and conditions for staff in the other terminals at Dublin airport, which are run by the State-owned DAA, and in the aviation sector generally.

He also criticised a proposal by the Department of Transport to remove “financial sustainability” from the issues that can be considered in determinations by the Commission for Aviation Regulation.

This would leave the DAA “exposed to the profiteering of a certain airline, who in recent weeks has shown its true colours in its disloyalty to its employees and customers in its insatiable quest for increased profits on the backs of poorly paid aviation workers,” he said.

Conference delegates voted unanimously to back a motion reaffirming “the union’s commitment to prevent and/or limit the extent to which public transport becomes privatised”.