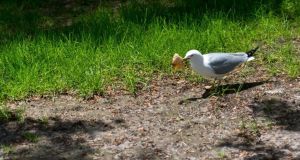 Imagine the surprise of a hotel guest who came back to find his room full of seagulls and their droppings. Nick Burchill was a guest in the Fairmont Hotel Empress in Victoria, Canada. He brought with him a small suitcase of Brother’s Pepperoni and the seagulls got in through a small window and had a feast. Needless to say the hotel was not too happy and Burchill has been banned from there for 17 years.

Global distribution system Amadeus, owned by the various world airlines, will start to feel the pinch when their owners begin to move towards bookings through Travelport. This month Air France, KLM and International Airline Group will use Travelport as the only operator of a GDS with the highest level of IATA certification for the deployment of its new distribution capability technology.

A record number of passengers – 4.1 billion – were carried by the aviation industry last year. There were 12 accidents, eight less than the previous year – with three fatal accidents and 189 fatalities.

Growing business confidence and fuller planes are encouraging airlines to push up prices.

BCD Travel has adjusted its forecast for air fares in 2018 based on strengthening demand and higher oil prices.

The travel management company says that it expects air fares globally to rise by one per cent on average this year.

As the economic outlook improves, strong global air travel demand and rising oil prices are helping to push up fares. In response to supply constraint and increasing demand, BCD raised its oil price assumption from $50 a barrel to $60.

The international airport transit hotel brand Aerotel, part of airport services company Plaza Premium Group, will open its first property in Europe and sixth globally at Heathrow this month. The only airport landside hotel at Terminal 3, its lobby is conveniently in the east wing of arrivals. It is also easily accessible by foot from Terminal 2, the central bus station and Heathrow Express. Bookings will be available in hourly slots for a minimum of six hours.

Heathrow head of property John Arbuckle said: “This new comfortable and modern hotel will be really valuable for customers in need of a quiet haven to rest, relax and prepare for their onward journeys.”

Each of the Aerotel’s 80-plus rooms accommodates between one and four guests. Rooms have power showers and the hotel also features a 24-hour library lounge with hot and cold food and drinks, free wifi as well as newspapers, magazines and TV. Room rates start from £50 (€57) for six hours. myaerotel.com