Government is ready to bail out CIÉ if necessary, Shane Ross says 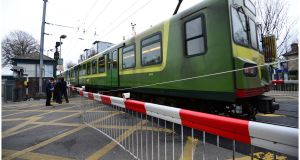 The Government stands ready to provide the State’s largest public transport provider with a bailout should it be necessary, Minister for Transport Shane Ross has said.

Mr Ross warned of a “crisis in funding” as transport sector revenue generated by fares was down by at least 90 per cent amid the Covid-19 pandemic.

Speaking on RTÉ Radio’s This Week programme, Mr Ross was asked whether a State bailout of CIÉ might be required. CIÉ companies include Dublin Bus, Bus Éireann, Irish Rail, and CIÉ Tours.

“We will support them, and make sure the routes they are operating and public transport in this country keeps operating and operating effectively,” said Mr Ross.

“So, the Government is not going to be found wanting in terms of supporting, in terms of money.

“We’ve said to them [CIÉ] they can spend their full-year subsidy first up to the end of June, and after that we will step in and assist them as well.

“There must not be any question of people thinking there is going to be some sort of emergency in vital public transport.

“Public transport is going to continue to run, and it is going to bring people to work, and it’s going to keep the country operating and be part of the recovery.”

Mr Ross also insisted there would be no early reopening of driving test centres, as tests would involve “a straight breach of social distancing guidelines”.

“It is very difficult to see a situation where driving tests will be introduced early, because of the difficulties in people sitting beside each other,” he said.

“There is no way, in the average car, that you would have two people together without breaching social distancing guidelines.

Separately, Mr Ross said the Government has no plans to buy a stake in Aer Lingus.

The airline is fighting for survival due to the Covid-19 pandemic, and has said it expects its business next year to be about 20 per cent smaller than in 2019. It is understood to be seeking to reduce its headcount by approximately 900 staff.

“We are keeping in very close touch with Aer Lingus, Ryanair, and with all the airlines that are flying in and out of the airports in Ireland, and some of them obviously are hitting difficulties,” said Mr Ross.

“At the moment, Aer Lingus and Ryanair have got strong balance sheets, but we certainly are watching what is happening there.

“We don’t want to have to get into a situation where we give them a huge amount of help because they have been doing very well, but it would be inconceivable that we weren’t aware of what is going on.

“We have no plans whatsoever to take a stake in Aer Lingus.”