Ireland ‘out of step’ with rest of Europe on overseas travel, says Ryanair 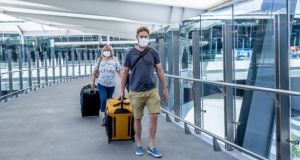 Public health officials have been doubling down on their opposition to any relaxation of overseas travel restrictions. Photograph: iStock

The Government is committed to finalising its roadmap for safe overseas travel “very shortly”, the assistant general secretary at the Department of Taoiseach has said.

Speaking at a Government’s Covid-19 briefing on Wednesday Liz Canavan said that the advice is still to avoid non-essential travel abroad.

This week at least six cases of coronavirus recorded are related to international travel, she said.

“We have largely suppressed the spread of the virus in the community in Ireland and this is a major achievement,” she added.

“It’s important to remember in the early days of this pandemic, that our early cases in Ireland were associated with international travel.”

She said the Government understands the issue of foreign travel is causing “great uncertainty and worry”.

“Some people have holidays booked and are wondering what to do. We are acutely aware of this and we would ask you to bear with us … the Government has committed to preparing a roadmap for safe overseas travel and will finalise its considerations on this very shortly,” she said.

Ms Canavan said new outbreaks of the virus in other countries in recent weeks shows “how easy it is for this virus to begin to take hold again”.

“Countries that have had a low incidence are seeing a resurgence. Countries that had eased restrictions and thought they were through the worst have had to lockdown cities or areas again,” she said. “That is happening in Europe and worldwide.”

It emerged last night that not every passenger arriving into the country is receiving a follow-up call to check that they are self-isolating for 14 days following their arrival into the State.

The department said Covid-19 Passenger Locator Forms, which passengers are required to fill out, are randomly selected and a “large cohort” from every flight but not every passenger is called.

Figures released last week show that of the follow-up calls made between May 28th and June 21st more than a third of calls to passengers contacted in follow-up calls went unanswered.

The department said that as the passenger numbers increase significantly over the coming days, the task of making the follow-up calls will fall to the HSE as the department’s border management unit “will need to focus exclusively on their core function of immigrating passengers.”

Ms Canavan warned that “complacency is our biggest enemy now” and the public must continue to do the “simple things” such as washing hands regularly, good sneeze and cough etiquette, maintain social distancing and wear face masks on public transport.

“It is really important that we are aware that Covid-19 is still with us and hasn’t gone away,” she said.

“If each of us as individuals is not careful, if we do not continue to moderate our behaviour, it can begin circulating again.”

Will you travel abroad for a holiday this year?

Haven’t found myself shouting at the radio in quite a while but that interview on air travel and #Covid19 on @morningireland changed all that. As a citizen, I’ll keep taking my public health advice from our @CMOIreland and would recommend you do likewise

Ms Canavan also said a recent CSO study, which found 60 per cent of people said they were very compliant with guidelines compared to 80 per cent in April, is a concern.

An “intensive regime” of monitoring compliance with the back to work safety protocol has been led by the Health and Safety Authority (HSA) with assistance from the Workplace Relations Commission and the HSE. She said over 500 inspectors are involved in this work and an analysis of inspections indicates compliance with the protocol is “high” and that businesses are “generally taking a responsible and proactive approach”.

Ms Canavan said if a person feels unsafe or that a venue is too crowded they should leave and that personal responsibility is just as important as the approach businesses are taking.

“If you find yourself in a situation that makes you uncomfortable, if you feel that a business is too crowded or not applying the guidelines properly, you should leave. “Personal responsibility has been vital to our success in suppressing the virus and moving through the roadmap.

“If you feel unsafe, if you feel a venue is too crowded, go with your gut, trust your instincts, don’t go in or leave.”

Earlier a key Ryanair executive called on the government to “get the balance right” between public health and business.

Ireland was the only country “out of step” with the rest of Europe, Eddie Wilson, chief executive of Ryanair Designated Activity Company (DAC), told RTÉ radio’s Morning Ireland.

Public health officials here have been doubling down on their opposition to any relaxation of overseas travel restrictions.

Chief medical officer Dr Tony Holohan said people who have booked overseas trips should not travel at present due to the risk to themselves, families and the wider society.

Mr Wilson said, however, at some stage the country was going to have to get “back to normal” and that it was not possible to have restrictions open ended “forever”.

Every other country in Europe has returned to flying in keeping with European Centre for Disease Prevention and Control (ECDC) guidelines, he added.

Ryanair will have 1,000 flights today adhering to ECDC guidelines, and the return to the skies is not just for tourism but also for business, Mr Wilson said, adding the idea tourists were going to act in an irresponsible way was simply not the case.

The idea that Covid-19 just comes from abroad was not accurate, he said. “People will not lose their heads because they are on holidays. People are going to do it [holiday] sensibly.”

Dr Jack Lambert, specialist in infectious disease at the Mater hospital in Dublin, said if people observe the appropriate safety guidelines then it is safe to travel.

The Government needs to come up with practical solutions, he said.

People have stayed home for three to four months and there is still Covid-19 in the community and there are some cases as a result of travel.

Dr Lambert said that he would not recommend travelling to Florida or a trip to Disneyland because Covid was rampant, but he would go to Iceland, Slovenia or Greece – which he said were safer than any city centre in Ireland.

“This is a long-term problem, we need quick decisions,” he told Morning Ireland.

Dr Lambert pointed out that it took weeks for the government to come up with the restrictions. Decisions were needed from the experts in the best time period, to make recommendations, he said.

The EU had a list of countries that are safe, that have been vetted and “Ireland is going to think about it. The consequences are economic losses to everybody.”

Dr Lambert said he disagreed with Dr Holohan who had called on people not to holiday abroad. “I think we should go along with the best expert opinion. I’m not suggesting opening the borders and do nothing. I’m calling on them to come up with a plan the same as the rest of the world.”

Other countries had imposed regulations on face masks on public transport, but that had not happened in Ireland, he said. “Things can be done proactively – we don’t need to wait months and months.”

Passengers who did not fly because of the public health recommendations will not receive a refund, he said. Those who had their flights cancelled and opted for a cash refund will get their cash back, Mr Wilson said.

To date Ryanair has worked through almost 50 per cent of the backlog of refunds. Mr Wilson said 30 million passengers were discommoded at that time and it is taking time to get through the backlog.

“We’re back in the air because we want to fly, we want to get back to normal.”

Mr Wilson said 100,000 people depended on tourism and it was important to get the sector back up and running.

In response to the interview, former minister for health Simon Harris said on Twitter he found himself “shouting at the radio”.

“As a citizen, I’ll keep taking my public health advice from our @CMOIreland and would recommend you do likewise,” Mr Harris said.

In line with EU aviation and disease control authorities’ recommendations, the airline is making it mandatory for crew and passengers to wear face masks on its flights, along with providing only cashless inflight sales and asking travellers to bring fewer check-in bags.

Ryanair is planning about 3,500 job losses if it cannot agree pay cuts with its staff, the airline’s boss, Michael O’Leary, said on Wednesday.

Europe’s biggest airline had previously said that it had cut more than 250 staff from its office around Europe and was looking at up to 3,000 cuts among pilot and cabin crew.

“We’ve already announced about 3,500 job losses, but we’re engaged in extensive negotiations with our pilots, our cabin crew, and we’re asking them to all take pay cuts as an alternative to job losses,” Mr O’Leary told BBC.