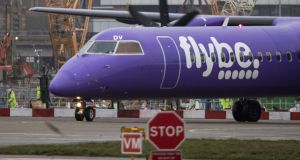 Flybe’s collapse has been averted after the UK government told the airline it would review air passenger duty.

The UK treasury announced on Tuesday that the loss-making carrier would continue operating after the review of the tax featured in rescue talks. Flybe’s shareholders also confirmed they would pump in additional funds “alongside government initiatives” to keep the firm in business.

The threat of collapse for the airline had raised fears for flights to Britain from several Irish airports.

Belfast city would be hardest hit should financial problems ground Flybe. The airline operates 14 services from there to destinations such as London, Edinburgh, Cardiff, Manchester and Glasgow, along with other regional centres.

The airline’s collapse would also hit Knock airport in Co Mayo, from where Flybe flies to Birmingham, East Midlands and Manchester.

Flybe offers flights to Cardiff, Exeter and Southampton from Dublin and it serves Cardiff from Cork.

Flybe, Europe’s largest regional carrier, confirmed it will “continue to operate as normal” following the deal with its shareholders.

Chancellor Sajid Javid said: “The reviews we are announcing today will help level up our economy. They will ensure that regional connections not only continue but flourish in the years to come – so that every nation and region can fulfil its potential.”

Flybe chief executive Mark Anderson welcomed the deal as a “positive outcome for the UK” which “will allow us to focus on delivering for our customers and planning for the future”.

Flybe’s shareholders Connect Airways, a consortium including Virgin Atlantic, Stobart Group and Cyrus Capital Partners, will put in more funding as part of the agreement.

Lucien Farrell, chairman of Connect Airways, said: “We are very encouraged with recent developments, especially the government’s recognition of the importance of Flybe to communities and businesses across the UK and the desire to strengthen regional connectivity.

“As a result, the shareholder consortium has committed to keep Flybe flying with additional funding alongside Government initiatives.”

The Treasury said the APD review ahead of the March budget would consider the UK’s climate commitments to meet net zero by 2050.

Mr Javid had been holding talks with colleagues to decide whether to let Flybe defer its estimated £106 million APD bill for three years or whether the tax should be cut for all domestic flights, according to multiple reports.

Passengers on domestic flights pay £26 in APD for a return trip, with higher rates for longer flights and premium cabins. – PA