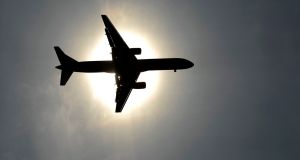 The cheapest of the new WestJet transatlantic flights are available from St John’s in Newfoundland to Dublin. Photograph: Philip Brown/Reuters

Canadian airline WestJet will complete its maiden transatlantic flight when the first of its newly chartered Dublin services touches down tomorrow morning.

WestJet caused a stir last November when it announced introductory offers from as low as €275 including taxes and charges for return flights from Canada to Ireland. The first of its Boeing 737 aircraft is due to land in Dublin Airport at 7am tomorrow, and the airline will continue a daily service until October 25th.

The new route was initially only due to run until October 5th, but its first batch of fares sold out in 24 hours, prompting the company to announce a three-week extension.

The cheapest flights are available from St John’s in Newfoundland, with passengers connecting to Toronto paying in the region of €430 for a round-trip.

It is the first and only European route offered by the budget airline, which also operates services to the USA, Mexico and the Caribbean.

Canada has proven a hugely popular destination for Irish emigrants in recent years, with the latest batch of 3,850 working holiday visas snapped up in a mere seven minutes in March.

“It’s very exciting to think that we are about to take our guests across the Atlantic Ocean for the very first time tonight. This represents a very significant strategic step in the growth of WestJet,” he told the Wall Street Journal.

“As we’ve expanded our reach, grown our fleet and added new products to broaden our appeal to different travel segments, it’s always been a dream of many WestJetters to one day be able to fly our guests to Europe. Today, the dream comes true,” he added.

Tourism Ireland says it is working with WestJet to maximise promotion of the new service, and hopes to develop its Canadian market further in the years ahead.