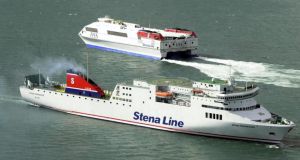 Stena Line ferries in Dublin Bay. Concerns have emerged that the line intends to pull out of Dún Laoghaire altogether and will not resume the service it normally operates from the port during the summer next year.

Fears are growing that ferry operator Stena Line may next year pull out of Dún Laoghaire, Co Dublin, in a move that sources estimate could cost the harbour company €7 million.

Stena recently announced it would not run its high-speed ferry service between Dún Laoghaire and Holyhead in Wales over Christmas for “commercial and operational reasons”.

Concerns have since emerged that it intends to pull out of Dún Laoghaire altogether and will not next year resume the service it normally operates from the port during the summer.

When Stena said it would not operate the Christmas holiday service, it noted it was in talks with the south Dublin harbour company in relation to providing the summer service next year.

Both sides say those negotiations are continuing. It is understood they are due to meet again for further talks in the near future.

Stena’s withdrawal would be a major blow to Dún Laoghaire Harbour. Sources estimate that Stena’s business is worth €7 million a year to the company, which lost €890,000 in 2013.

Stena also operates ferry services to Holyhead from nearby Dublin Port. It has been suggested this route could absorb any traffic from Dún Laoghaire.

The harbour company has begun chasing cruise business and is planning to spend €15 million on building a special berth.

It is finalising an application to An Bord Pleanála for this facility under strategic infrastructure laws designed to fast-track nationally important projects through the planning process.

It also reported recently that 23 cruise ships “will bring a record 66,867 passengers” to the harbour next year.

Four years ago, the company, Dún Laoghaire-Rathdown County Council and Dún Laoghaire Business Improvement District, formed a group that aimed to tap into this market.

Dún Laoghaire Harbour’s income is drawn from port activities, the ferry business and renting facilities to various maritime-based businesses. Stena is thought to be its largest customer.

6 Graduates now earn more in Ireland than in UK, but Germany tops both