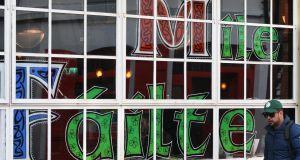 Fáilte Ireland’s remit includes responsibilities such as product development at home and the marketing of domestic tourism.

A turf war has broken out between the two State tourism agencies, Tourism Ireland and Fáilte Ireland, over the latter’s plans to place staff in the United States and Europe to tempt wealthy foreigners to holiday in Ireland. The staff would also target foreign businesses to hold conferences and other events here.

It is understood that Tourism Ireland wrote to the Minister for Tourism, Shane Ross, to complain about Fáilte Ireland’s plan because it feared that it cut across its responsibilities.

Tourism Ireland is the agency formally mandated to market Ireland abroad. Fáilte Ireland’s remit includes responsibilities such as product development at home and the marketing of domestic tourism.

The Department of Transport, Tourism and Sport has refused to release a copy of the letter of complaint sent to it by Tourism Ireland after Fáilte Ireland revealed its plans in June, when it tendered for an agency to supply the foreign-based staff.

The department said any records it held on the matter were part of an internal “deliberative process” and that it would not be in the public interest to release them under freedom-of-information (FOI) laws.

Tourism Ireland also refused to release the letter it sent, or any other relevant records it held, on the same basis.

Fáilte Ireland also refused to release its record of relevant correspondence, although it confirmed that several emails on the matter had been sent between it and the Government.

A schedule of records shows that correspondence on the matter was exchanged between Fáilte Ireland and the Government on August 14th, the day after The Irish Times made an FOI request to the department for the records.

The matter was also discussed in a flurry of internal Fáilte Ireland correspondence over the summer.

When asked in recent days if he had intervened in the row between the two State agencies after he received the complaint letter, Mr Ross did not directly address the issue, but said: “[I] set national tourism policy . . . the tourism agencies have operational responsibility for the implementation of this policy.”

Fáilte Ireland denied that it plans to engage in any “marketing” of Ireland as a tourism destination abroad, and said that is the responsibility of Tourism Ireland. It said it has hired “lead generation” staff since 2010. It insisted it is pressing ahead with its plan, and has awarded the tender.

Tourism Ireland did not directly address specific queries from The Irish Times over the concerns it raised with the Government.

“We work closely with Fáilte Ireland to ensure that our promotional themes align with their development priorities for the tourism industry,” it said.

The June tender from Fáilte Ireland was for a three-year contract to place agents in the US, Canada and across Europe to generate sales leads for business tourism. The agents would also target “ultra high net worth individuals” with assets of more than €5 million to holiday in Ireland.