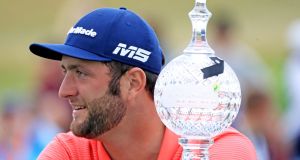 According to figures provided by Fáilte Ireland in response to a Freedom of Information request, the tourism agency paid third parties €495,187 towards staging the event, with €250,000 going toward sponsorship of the event.

Over the four days, 86,793 golf fans paid to see the likes of winner, Jon Rahm, Shane Lowry and Pádraig Harrington at the Lahinch course.

The European Tour’s director of the Dubai Duty Free Irish Open, Simon Alliss said that the event “was undoubtedly a huge success”.

A spokeswoman for Fáilte Ireland said that it was delighted to support the event which “provided unrivalled promotion of Ireland and Lahinch as both a golf and visitor destination”.

Some of the €4 million council spend was funded by Government grants. The spend included €2.5 million on Lahinch rock armour; €700,000 on the upgrade of roads, footpaths and car-parking; €75,000 on family entertainment; €50,000 on a paint scheme; €50,000 on tourism including aerial footage shown on the Golf Channel and €100,000 on roads, civil defence, waste management and gardening .