Tourism agency hopes to grow meeting and conference market by 55% to €1.2bn 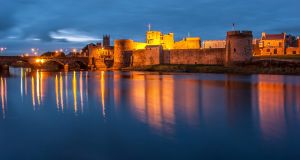 Fáilte Ireland wants to boost the volume of conferences going to the Limerick and Shannon regions. Photograph: iStock

Fáilte Ireland is appealing to attract more international conferences to the Limerick and Shannon regions as it plans to grow the meeting, incentive, conference and events (MICE) market in the Republic by 55 per cent to be worth €1.2 billion.

The national tourism development authority has joined up with the Shannon Region Conference and Sports Bureau in a bid to recruit academics in the region to attract more conferences through its conference ambassador programme.

That particular programme is designed to support individuals and experts looking to host a conference in Ireland. Under the programme Prof Elfed Lewis from the University of Limerick (UL) attracted the “IEEE Internet of Things Symposium” to Limerick, bringing 1,000 delegates to the city in 2019.

So far this year the partnership has brought conferences to the region worth €4.5 million with a health conference, for example, going to the UL in August.

“Conferences like these are not only lucrative in terms of generating significant revenue for the region, they also leave a lasting legacy with regard to being recognised as a centre of innovation and excellence in these fields,” said Paul Mocklet, Fáilte Ireland’s head of commercial development.

Fáilte Ireland says over 75 per cent of all international association conferences that come to Ireland do so at the direct invitation of a local Irish member. Their bid to attract ambassadors for conferences comes as it hopes to build the international MICE market significantly over the next ten years.

As it stands, business tourism is worth a relatively small fraction of the total tourist spend in Ireland. Last year, tourists spent €7.1 billion in an industry employing an estimated 235,000 people. Business tourism, meanwhile, was worth €758 million to the economy in 2017 and supported 22,000 jobs.

Through its ambassador programme Fáilte Ireland identifies a person of influence in their field. That person then bids for a conference and the tourism agency provides both practical and financial aid to support the bid and the subsequent conference.

“Fáilte Ireland’s support really helps shoulder some of the financial costs associated with bidding for international business, while the Bureau is on hand to offer practical advice from the start to end of the bid journey,” said Karen Brosnahan, the manager of Shannon Region Conference and Sports Bureau.