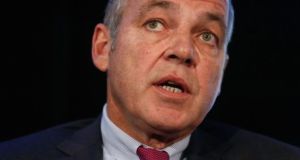 Former Aer Lingus chief executive Christoph Mueller has resigned from his post as head of Malaysia Airlines and will leave the airline in September.

The move comes after Mr Mueller took over as chief executive of Malaysia last year, charged with turning round the airline which lost two planes in tragic circumstances in 2014.

Mr Mueller asked to step down before the end of his three-year contract for personal reasons. He will serve a six-month notice period while the airline searches for a successor. He expressed his intention to remain with the airline as a non-executive director.

The former Aer Lingus chief executive became managing director and chief executive at Malaysia in May 2015, charged with reviving the carrier that was racking up losses even before hundreds of people died in two 2014 crashes.

Mr Mueller left Aer Lingus last February after six years at the helm. He described Malyasisa Airlines as being “technically bankrupt” on his arrival in the country as he announced plans for a restructuring that saw the company’s workforce cut by a third.

Mr Mueller said on Tuesday he was confident the carrier was on track to return to profitability.

“I am proud of what we have achieved as a team in such a short time and that the hard work of all of our employees is already showing the first signs of success. I am looking forward to continuing this exciting task for another six months in my executive position,” he said.

“The airline has been restructured and repositioned to regain its leading position in customers experience and to continue to connect Malaysia with the world, I am confident that the company is now on the right track to succeed in its next phase of growth under a new chief executive,” he added.

1 Stripe moves payment processing to Dublin due to Brexit
2 Dublin Airport says pre-flight Covid tests possible ‘within days’
3 Big night for Big Tech as Apple, Google, Amazon and Facebook post strong results
4 How long can Government afford to keep State pension age at 66?
5 Over 60% of mortgage holders miss chance to save €10,000
6 How much state pension will I get next year?
7 PTSB’s €1.4bn sale is a sign it is preparing for a fresh loans crisis
8 Developers fail to stop receiver selling €60m Dublin City Quay property
9 Can Big Tech’s backing install Biden in the White House?
10 Revenue accused of harassing businesses over Covid wage subsidy scheme
Real news has value SUBSCRIBE