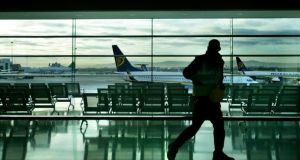 Dublin Airport: In 2015, a million of the 25 million people going through the airport were transfer passengers. That should rise this year as Aer Lingus adds services to Hartford Connecticut, New Jersey and LA. Photograph: Kate Geraghty

The number of transfer passengers travelling through Dublin Airport rose 50 per cent to 250,000 in the first four months of the year.

Dublin is seeking to establish itself as a transatlantic hub by increasing the travellers using it to connect to flights between Europe and North America, driven largely by Aer Lingus.

As the number transferring between European and North American services rose to 250,000 in the first four months of 2016, total numbers at the airport were up 15 per cent at 7.8 million.

In 2015, a million of the 25 million people going through Dublin Airport were transfer passengers. That should rise this year as Aer Lingus adds services to Hartford Connecticut, New Jersey and LA.

The news came as the Central Statistics’ Office said on Monday that 30 million people travelled through the Republic’s airports last year. That was just short of the 31.3 million that passenger numbers reached in 2008, before tourism declined in the recession.

Kerry Airport on Monday published results showing its numbers rose 4 per cent to 307,000 in 2015.

Ahead of its annual conference in Dublin this week, the International Air Transport Association (IATA) said the Brussels attacks in March hit demand the month after.

The association, which represents the bulk of the global industry, said air travel grew 4.6 per cent in April, its slowest rate since January 2015.

Airlines sold 79.1 per cent of their seats, which was down 0.3 per cent. That was because carriers increased capacity in April.

Aer Lingus is sponsoring the conference at the RDS. Dublin Airport Authority is joining with Tourism Ireland and IDA Ireland to use the conference to promote the Republic as a destination for investment and travel.