Aircraft maintenance specialist says it is planning for the long term 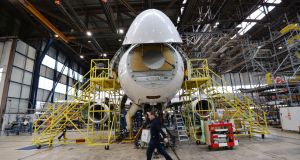 The Dublin Airport-based business, which employs 350 people, confirmed that it would take on the new workers, who will learn their trade over four years, from October.

Mr McCarthy noted that the apprenticeships would give the successful candidates the opportunity to “earn while they learn”.

The four-year period will include 70 weeks in college, where they will earn a qualification in aircraft engineering.

Mr McCarthy said that many people had asked why the company was hiring in the teeth of the Covid-19 crisis, which has left air travel reeling.

“There’s a very simple reason for that, it’s a four-year programme,” he said, adding that Dublin Aerospace was planning for the long-term when it decided to hire the new workers.

Tánaiste Leo Vardkar welcomed the news on Wednesday. “It’s a huge vote of confidence in the sector,” he said.