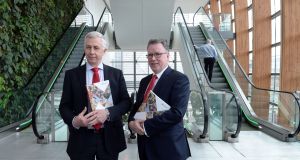 Hotels, tourism, hospitality – it’s all about hosting and being polite. So it was noticeable how scathing Dalata’s Pat McCann, the country’s biggest hotelier, was last week with his dismissal as “the biggest load of rot” the notion that Dublin may need to build a 1,000-bedroom super-hotel.

All the more so given that the suggestion he so sharply slapped down came from Paul Kelly, the chief executive of Fáilte Ireland, the State agency with primarily responsibility for overseeing the Irish tourism industry.

Kelly put forward the notion last week while chatting on the fringes of Meitheal, Fáilte Ireland’s annual industry showcase. He wasn’t simply responding to an idea that was put to him about whether Dublin needs a super hotel to attract major international conventions.

Rather, it was Kelly who suggested, unprompted, that the city was losing out on “tens of millions of euro” in revenue from major international conferences that want to house all of their delegates under one roof, as opposed to dispersing them in hotels around the city. There are 5,000 hotel rooms under development in Dublin to address a chronic shortage, but Fáilte Ireland reckons at least another 1,000 rooms are required to meet demand in the coming years.

Kelly said the site for a “superhotel” would have to be close to the city centre, ideally near the Convention Centre on the quays. Kelly even went as far as to say that Fáilte Ireland was in talks with developers to assist them in examining the idea, and he sounded upbeat about the prospects.

“We are actively engaged with property developers in discussions about the options regarding sites,” he said. “We’re encouraged by the conversations to date. I think we will solve [the problem of the lack of large hotels].”

McCann, who formerly ran the Jury’s group in its pre-crash heyday, is the highest-profile hotelier in the State. The Sligo man is known for his business nous and his personal touch. He is also known for occasionally speaking plainly, although he is much too long in the tooth to simply blurt things out. McCann deliberately only uses sharp words if he is trying to puncture something.

It seems that not only has Fáilte Ireland been talking to property developers who may be interested in building a 1,000-bedroom hotel. The State agency has been talking about building it with them.

Fáilte Ireland has examined the possibility of demolishing its own headquarters on Amiens Street, where it could be replaced with the very type of of superhotel that Kelly is suggesting.

It confirmed it this week: “In the course of a normal working conversation between [Paul Kelly] and a property developer in November 2018 regarding general hotel capacity in the Dublin area, the question of potentially redeveloping Fáilte Ireland’s Amiens Street headquarters was raised.

“Fáilte Ireland has since attended some exploratory meetings with the developer on the matter,” it added.

McCann’s Dalata is among the most active hotel developers in the city at the moment, having recently built the Maldron hotel on Kevin Street near Christchurch cathedral, and the Clayton at Charlemont, on the canal near Ranelagh just south of the city centre.

It would be an obvious candidate to build or operate such a large-scale hotel in the city, if the idea were to gain traction. McCann, however, clearly has no intentions of getting involved. The word is that a few property developers have been made aware of Fáilte Ireland’s apparent willingness to discuss building on its HQ site. Whoever the agency may be in “exploratory” talks with, it isn’t Dalata.

Fáilte Ireland’s headquarters is in one of those unusual inner-city locations where it is difficult to assess what sort of development could work on the site.

Working off Kelly’s list of essential criteria, it is indeed close to the city centre and not too far from the Convention Centre Dublin, which is about a 15-minute walk away down Sheriff Street.

It is also probably large enough to accommodate a superhotel, if the council were to allow a developer to go up a few floors. The key to unlocking the site, however, would be for a developer to gain control of the garage forecourt site next door to the Fáilte Ireland’s HQ. The forecourt separates its building from a third, completely derelict, site.

Link all three together, and you would have an enviably large parcel of development land directly adjacent to the north of the city centre, the burgeoning docklands and Dublin’s financial and business district.

The site would still have challenges, of course. The immediate vicinity bears the obvious scars of social deprivation and it is the front line of the ongoing criminal feud between the local Hutch gang and the Kinahans.

But hotel developments are renowned for being the catalyst for positive change in challenged neighbourhoods. McCann’s Dalata has experience of building hotels in working-class city communities.

McCann’s main argument is that a 1,000-bedroom hotel would be too big to work. The largest hotels in the city are currently Dalata’s Clayton Burlington with about 500 rooms, and its Ballsbridge hotel, with about 400. It also has 608 rooms at the Clayton near Dublin Airport.

The Citywest hotel, which Dalata used to run, has almost 800 rooms, but it is about 20km out of the city and relies on huge events as well as its golf course. There are no golf courses near Sherrif Street.

“It doesn’t work anywhere in the world,” said McCann of the idea of keeping a 1,000-bedroom hotel exclusively for conference delegates. Kelly never suggested it would be exclusively for this, however, just as part of the mix.

There are several hotels of 1,000-room scale in London, but in this part of the world, that’s it. In Amsterdam, the near 400-bed Ibis appears to be the largest. In Manchester’s city centre, it is the 370-bedroom Britannia. The Holiday Inn is the largest in Edinburgh with about 300 rooms, while in Lisbon the largest is the Marriott with 580.

In the last boom, Dublin had its fill of the cavernous so-called superpubs. It could be a while yet before the city is ready for a superhotel.

Stephen Rae, the former editor-in-chief of Independent News & Media (INM), is back in the media industry fray. As his former employer mulls an approach from a would-be buyer, Rae has instead gone into the conference and events business with his journalistic former colleague, crime writer Paul Williams.

The two men are shareholders in the company that is behind the International Fraud Prevention Conference, which is due to take place in Dublin’s RDS next month. The main mover behind it appears to be James Treacy, the publisher of Stubbs Gazette, with whom Williams and Rae sit on the board of IFPC Ltd.

The business-to-business conference will kick off in the RDS Concert Hall on May 17th. The first speaker listed is none other than Charlie Flanagan, the Minister for Justice.

Former Fine Gael MEP and now banking lobbyist Brian Hayes will also give a presentation, while other scheduled big hitters on the podium include the head of the Garda National Economic Crime Bureau, Det Supt Pat Lordan; and Nicholas Kearns, the former president of the High Court.

Williams is, naturally, also due to say a few words, while Rae will moderate a number of panels, including a discussion with the FT’s US banking editor, Irish journalist Laura Noonan.

Meanwhile, there is no official word yet on the identity of the INM potential bidder, although all sorts of interesting rumors are flying around. Even Rae has been linked to a consortium said to have approached INM months ago. Who knows. But its former editor-in-chief looks, for now, like he has more immediate matters to attend to.