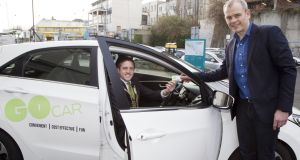 The GoCar service allows users to hire a car for as little as one hour at an hourly rate that includes fuel, tax, insurance and maintenance.

The service can be a relatively cost-effective way to do the school run, shopping or other short trips.

With the aid of the council, GoCar has established six on-street rental bases in Dundrum public car park beside the shopping centre, Cabinteely Village, Blackrock Dart station, Carmanhall Road in Sandyford, and Crofton Road and Haddington Terrace in Dún Laoghaire.

The move comes in response to the success of the car-sharing initiative with Dublin City Council, which has seen increased demand from residents and businesses since GoCar was launched in 2008.

The council said the new locations offer convenient connections with Dart and Luas stations, as well as the Dundrum shopping centre.

“This initiative provides choice as it offers an alternative sustainable travel mode to users to help them get around the county and the initiative has the potential to reduce traffic congestion and to lower car ownership levels,” Dún Laoghaire-Rathdown County Council chairman Cormac Devlin said.

GoCar’s managing director Colm Brady said the company was planning to double the number of vehicles available in 2017 and that it hoped the move would see more local authorities providing on-street parking permits for car-sharing.

The company has begun adding electric vehicles to its fleet and many believe car-sharing services could be instrumental in promoting cleaner motoring.