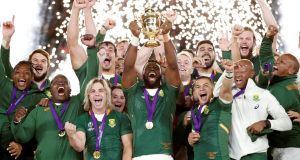 Irish rugby fans in Yokohama in November: Club Travel sales this year were boosted by the Rugby World Cup, which was held in Japan. File photograph: Matthew Childs/Reuters

The purchase comes after a particularly buoyant 2018 for the McKenna family-owned Atlas Travel with pretax profits jumping by 73 per cent to €1.22 million as revenues surged by 22 per cent to €69.46 million.

Club Travel director Colman Burke said the purchase was his company’s largest to date. Club has previously acquired Abbey Travel and the Budget Travel brand among others. Mr Burke did not disclose the purchase price for Atlas.

He said the 66 people employed at Atlas would be retained as would the brand. Club Travel, which has the contract to operate as the Government’s travel agent, already employs more than 200 people.

Atlas, which the McKennas have run since 1961, is a strong player in the corporate travel sector and, along with its Dublin base, has a presence at the offices of three of the largest US multinationals operating here – Intel, Boston Scientific and Analog Devices.

The deal comes towards the end of a busy 2019 for Liam Lonergan-owned Club Travel.

“We have had a strong year, growing by close to double digit figures on both our retail and corporate divisions,” Mr Burke said. The company reported sales of €152.3 million last year.

“Sales were boosted by the Rugby World Cup, as we were the official Irish agent and organised packages for thousands of Irish fans to Japan. ”