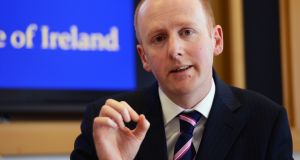 Lorcan O’Connor, an accountant, is currently head of the Insolvency Service of Ireland. Photograph: Eric Luke

Tackling a €780 million pension shortfall and managing extensive properties are among the challenges facing incoming CIÉ chief executive Lorcan O’Connor when he takes the helm at the State’s public transport group next year.

CIÉ has appointed Mr O’Connor as its first chief executive for several years. He joins the holding company for the State’s bus and train operators from the Insolvency Service of Ireland.

Mr O’Connor is taking charge at a company that at the end of last year had a €784 million deficit in its defined benefit pension fund, which pays retired workers an income tied to their salaries.

The shortfall in the workers’ pension pot is the biggest of any State company and is a flashpoint between the group’s management and its unions.

He will also oversee one of CIÉ’s group’s key roles, managing properties, including those at bus and rail stations, to generate a return for the group.

They include a €160 million partnership with builders BAM and developers Paddy McKillen and Tony Leonard to construct homes, shops and offices at Horgan’s Quay, close to Kent Station in Cork.

Mr Barrett’s former partner in Treasury Holdings, Johnny Ronan, wants to build a skyscraper on a site next to Tara Street station, also in the capital.

CIÉ could also provide sites to the newly formed Land Development Agency, established to use State-owned properties to ease the Republic’s housing crisis and to manage these assets over the long term.

The transport group continues to use most of its land for its operations. The Government plans to invest €2 billion across CIÉ’s companies, Bus Éireann, Dublin Bus and Irish Rail, to boost public transport. This now looks set to start under Mr O’Connor’s watch.

A chartered accountant, Mr O’Connor was previously a financial adviser to the Department of Transport, Tourism and Sport, where he worked on the flotation of what was then the national airline, Aer Lingus.

Closer to his new job, in 2009 he wrote a cost and efficiency review of Dublin Bus and Bus Éireann.

As a director with Deloitte corporate finance he worked on the liquidation of Waterford crystal maker, Waterford Wedgwood, and the receivership of bookseller and newsagent, Hughes & Hughes .

Mr O’Connor became the first head of the Insolvency Service of Ireland in November 2012. He has a bachelor of business and legal studies degree from University College Dublin.

He said yesterday he was looking forward to tackling the financial challenges faced by his new employer while building on its real achievements.

“With the assistance of the National Transport Authority, the CIÉ Group plays a critical role in keeping Ireland moving in a sustainable manner,” he said.

Fiona Ross, chairwoman of CIÉ, predicted that Mr O’Connor’s experience would ensure the group could be viable while providing safe and efficient public transport.