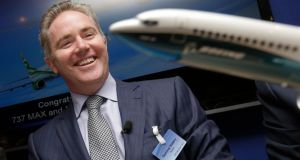 Irish-based aircraft leasing firm Avolon is in talks with China’s $653 billion sovereign wealth fund, China Investment Corp (CIC),about a possible takeover by the Chinese fund for $4 billion to $5 billion including debt, according to people familiar with the matter.

CIC is teamed up with Aviation Industry Corporation of China (AVIC), a state-owned aerospace and defence company, in its bid for Avolon, which provides aircraft leasing and lease management services to airlines and aircraft investors, one of the people said.

The buyer group has been working on a potential acquisition of Avolon for the past several months but any deal is still months away, the people said, asking not to be named because the discussions are confidential.

Private equity-owned Avolon is estimated to have an equity value of around $2.5 billion, the people said. Including debt, the proposed deal could have an enterprise value of $4 billion to $5 billion, they added.

The discussions with CIC come as Avolon is simultaneously pursuing an initial public offering, in a bet that yield-hungry investors eyeing growing demand for air travel would sustain a recent boom in aircraft finance.

CIC’s interest underscores strong demand for aircraft assets from Asian buyers, at a time when the region has become the world’s fastest growing market as Asian airlines tap into the spending power of travellers.

China, one of the world’s biggest buyers of aircraft, is playing a bigger part in the global aviation industry as its airlines seek to cater to the nation’s growing number of business and leisure travellers.

Another Chinese consortium made an unsuccessful bid in 2012 to buy aircraft lessor International Lease Finance Corp from US insurance giant AIG. That proposal deal fell apart, and AIG ended up selling ILFC to AerCap Holdings in December.

Avolon, which is backed by private equity firms Cinven Ltd, CVC Capital Partners Ltd and Oak Hill Capital Partners, as well as Singapore’s sovereign wealth fund, has been working with Morgan Stanley and JPMorgan Chase on a potential sale or IPO.

Representatives for CIC and AVIC could not be immediately reached for comment. Avolon, Cinven and Oak Hill did not respond to requests for comment. CVC declined to comment.

China Business News reported on Friday that CIC is teaming up with AVIC to bid for Avolon in a deal worth some €12 billion euros.

Avolon has raised $7.2 billion in capital since its launch in May 2010. It has a fleet of more than 190 aircraft serving 46 customers in 27 countries.

Avolon’s focus is on young and fuel-efficient single-aisle aircraft made by Boeing and Airbus Group. In 2013, it delivered a total of 34 aircraft to its customers valued at more than $2 billion.

CIC, whose previous high-profile investments included taking a 10 per cent stake in Britain’s Heathrow Airport Holdings in 2012 for £450 million, has not announced any deals of note in the past year as it underwent a leadership reshuffle.